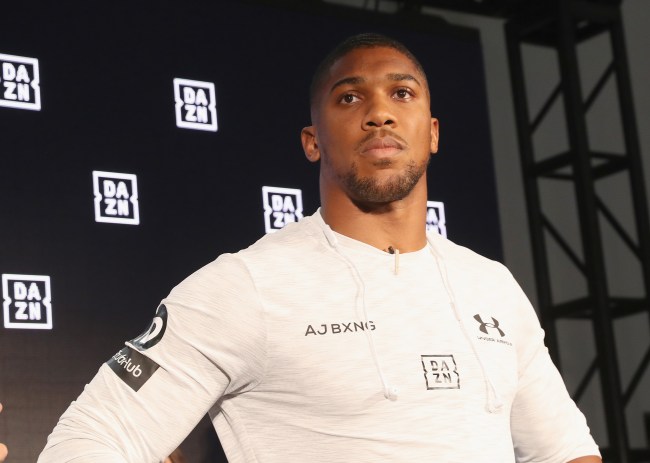 NEW YORK, NY - JULY 17: Anthony Joshua on stage at the U.S. launch of DAZN - The Future of Sports Streaming at Industria Studios on July 17, 2018 in New York City. (Photo by Johnny Nunez/Getty Images for DAZN)

DAZN, the world’s largest dedicated live and on-demand sports streaming service, announced its entry into the U.S. market on Tuesday in front of a packed house at Industria NYC. The service will launch in the States on September 10th, at a cost of $9.99/month (following one-month trial); combat sports will make up much of the platform’s flagship programming until broadcast rights for other sports/leagues become available at the turn of the decade. DAZN will hold its first fight night on September 22nd, with WBA, IBF and WBO heavyweight world champion Anthony Joshua taking on Alexander Povetkin live from Wembley Stadium. JohnWallStreet had the chance to sit down with the Champ at the DAZN U.S. launch event to discuss his plans to become a billionaire, to see if he has any concerns about a subscription model costing him money and why athletes sitting in first class haven’t necessarily forgotten where they come from.

JWS: You’re open about pursuing your goal of becoming a billionaire. You have a successful line of gyms, what other businesses are generating income for you?

Anthony: I don’t like to talk about my investments and stuff like that. In this day and age success is determined by finance, your investments; but, I see being a billionaire as a mindset. That’s what I’ve managed to build over the years that has enabled me to achieve “success” in terms of finance.

JWS: Mayweather made a fortune collecting on a portion of PPV receipts. Do you worry that DAZN’s subscription model will cost you money?

Anthony: So, a good business person would look at how they can take a percentage of the company. If it’s going to affect your earnings one way, how can you protect yourself in another. It’s a great opportunity. DAZN should only add to the industry, not take away from it.

Editor Note: This quote would seem to imply that Anthony maintains a stake in DAZN.

JWS: You mentioned that you’ve signed endorsement deals with brands that align with your long-term goals. How does the Jaguar/Range Rover relationship play into that?

Anthony: So, the reason we work with Jaguar/Range Rover is that I met someone who worked there years ago when I was driving a small car. Number one, we got along because of character. He took to my character and believed in my story; and they do ambassador roles, anyway. The thing about Jaguar/Range Rover is that it’s a big car and with a lot of traveling and for the longevity of an athlete, you need to be comfortable when you travel. If you see an athlete traveling in first class it’s not because he’s forgotten where he’s come from, but because he needs to preserve his body. An athlete in a big Range Rover isn’t because he wants to be flashy, he needs to be comfortable because his body is his temple; that’s why the organic relationship with Range Rover/Land Rover came about. I could be with Lamborghini, but it doesn’t really make sense for my long-term goal which is to be the undisputed heavyweight champion of the world.

Perform Group is a subsidiary of privately held Access Industries. The sports media company counts The Sporting News and Goal among its U.S. publications. While you can’t invest in Perform Group, there is one way to play DAZN; Dentsu, a Japanese advertising firm that trades publicly on the Tokyo Stock Exchange under the symbol (TYO: 4324). In late March, Dentsu invested in DAZN as part of a deal “which made the service available to customers of mobile phone operator NTT Docomo.” No information has been released relating to the size of the investment or the valuation placed on the company.

Fan Marino: Combat sports fans who regularly purchase PPV fights are going to love DAZN. At $9.99/month you’ll get 70+ fight nights/year, for roughly the cost of 2 PPV events; or one silly Mayweather-McGregor exhibition.

When I brought up the name Deontay Wilder, Anthony decided to ask the questions.

Anthony: He’s had 40 fights. How come you’ve never called for another mega-fight with Wilder?

Fan: Well, I think you’re the only other “mega” fighter out there.

Anthony: Listen, I need to win against Povetkin, but my real dream is to fight Deontay Wilder as he holds the WBC heavyweight championship.

Howie Long-Short: It’s time we put to rest the notion that the NFL is declining in popularity. Player protests. Brain injuries. Criminal Accusations (think: LeSean McCoy). None of it has had any impact on revenue generation (according to Packers President Mark Murphy). While we’re at it, let’s end the talk that the NBA is closing the gap on the NFL; it’s not. For all the overseas interest we hear about, NBA teams split just $7.4 billion in TOTAL revenue last year.

The Packers are publicly traded but stockholders hold no equity interest, shares do not pay dividends and they cannot be sold; except for back to the team at a discounted price. Great deal (rolling eyes). For those wondering, the balance of the team’s revenue ($199 million, +.8% YoY) came from sponsorships, game-day revenue, local broadcast fees, sales at the team’s pro shop and tickets to their Hall of Fame exhibit.

Fan Marino: One argument I will buy regarding the NFL is that the controversies, particularly as it relates to CTE, have negatively impacted the value of franchises. Even with newly signed TNF and streaming deals, Trump related tax breaks and legalized gambling on the horizon, the Carolina Panthers sold for 5.9x ’16 revenue; just a slight increase over in 5.6x multiple Buffalo sold for in ‘14. By comparison, the Rockets sold for 7.4x in ‘17. I continue to maintain David Tepper got a great deal.