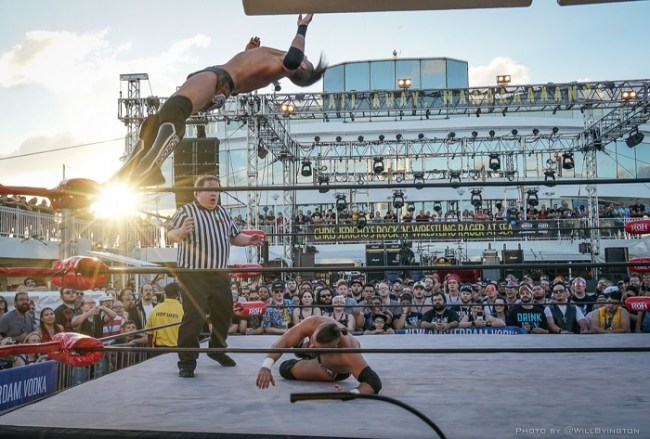 Cody Rhodes (birth name Cody Runnels) and The Young Bucks (birth names Matt Jackson and Nick Jackson), formerly of New Japan Pro Wrestling and Ring of Honor respectively, have announced the formation of “All Elite Wrestling” (or AEW); a new promotion intent on surpassing WWE as the industry leader. Jacksonville Jaguars (and Fulham F.C.) owner Shahid Khan (and his son Tony) will finance the venture (they’re putting up $100 million), with Rhodes and The Young Bucks each signing multi-year deals with the company to both wrestle and service in an EVP capacity. The promotion’s first event, Double or Nothing, will occur in Las Vegas on May 25th.

Howie Long-Short: Cody Rhodes and The Young Bucks could have signed lucrative deals with WWE as free agents (Rhodes turned an offer down in Dec.), but opted to “change the world” instead. Change in the wrestling world means paying wrestlers more, instituting more  “favorable schedules” (see: not wrestling 250 days/year), offering female wrestlers compensation on par with the men and providing at least some of the roster with healthcare (and benefits) not afforded to WWE’s independent contractors.

Khan’s investment into AEW is significant, with industry experts speculating that it’s the largest investment into the pro wrestling space since Ted Turner financed WCW back in the mid 90s. That backing (net worth $6.3 billion) gives AEW the opportunity to compete with the WWE for talent, but reports indicating the new promotion has WWE “worried” seem a bit premature; even if “All In” was the largest non-WWE show since ’99 (self-financed by Cody Rhodes and The Young Bucks). WWE has a $6 billion market cap, a larger YouTube following than that of the NBA, NFL, MLS, MLB, NHL, PGA TOUR and NASCAR combined and new television deals worth $468 million/year; their status as the industry leader remains safe for the foreseeable future.

Speaking of the new television deals, AEW has yet to find a broadcast partner, but the TV dollars being paid for live sports (or sports entertainment) content are what’s driving Khan’s interest in the wrestling business; it’s been reported that multiple deals are on the table (possibly: AXS TV, TNT/TBS). Wherever the promotion’s weekly show lands, expect it to air on Tuesday nights in the timeslot vacated by WWE’s SmackDown Live; that show is moving from Tuesday to Friday nights when their new deal with Fox begins in October.

AEW will have a roster full of popular wrestlers, but it’s the talent they’ve been able to acquire behind the scenes that has me convinced the company will be able to carve out a niche in the U.S. sports entertainment space. Legendary commentator Jim Ross, long-time fan favorites Chris Jericho and Billy Gunn and former ROH wrestler/producer BJ Whitmer are all on board with the new promotion in front office or advisory capacities.

There were reports on Tuesday evening that WWE security had prevented at least some fans wearing AEW merchandise from entering the building for SmackDown Live! Some suspected the orders came from the top down with WWE “legitimately scared for the first time in 20 years.” If the WWE is scared, they’re taking AEW as a more serious threat to the business than Wall Street is; WWE shares are up 6% (to $78.92) YTD.

Fan Marino: Kenny Omega (birth certificate says Tyson Smith), considered the best professional wrestler in the business, has announced he’s leaving New Japan Pro Wrestling after losing the IWGP Heavyweight Championship at Wrestle Kingdom (the promotion’s biggest annual event); his contract expires at the end of the month. The soon to be free-agent, aka “The Cleaner”, is expected to choose between working for wrestling’s most successful promotion (WWE) or with his buddies (Cody Rhodes, The Young Bucks) at AEW. Ringside Seats has reported that AEW is prepared to announce Omega’s signing with the company later this month.