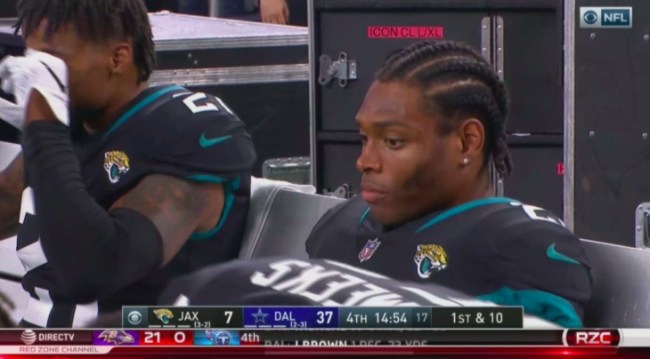 The Jacksonville Jaguars got exposed on a national stage by a team that ranked in the bottom five of the NFL in points scored and points per game and who scored 40 points for the first time in nearly a calendar year. The Cowboys embarrassed the Jags, 40-7 Sunday, marking their most lopsided loss in three years. The past two games have been deplorable for an elite defense, allowing 44 points in the first half of their last two games after allowing a league-low 12 in the first half of their first four games.

Jalen Ramsey, whose incessant trash talk this offseason and beyond has been excused under the “he can back it up” loophole, is at an utter loss for words. After Ramsey finished with four tackles and one pass defended and Blake Bortles completed just three passes that traveled 10 or more yards beyond the line of scrimmage, Ramsey gave the “I don’t know” treatment to a slew of reporters staked out at his locker.

It also should be noted that before the season, Ramsey said this of Cowboys quarterback Dak Prescott:

Prescott finished with a 107.5 passer rating while also rushing for 82 yards, the second most rushing yards by a quarterback in team history.

the Cowboys beat the sass right out of Jalen Ramseypic.twitter.com/DRiDrrBSOG

Jalen Ramsey doesn't appear to attempt a tackle at the goal line to prevent Cole Beasley from getting into the end zone. pic.twitter.com/1TPuG7fwX8

Jalen Ramsey is a great player. But he needs to learn to be a professional.

If you’re going to chirp, talk trash and repeatedly take shots at great players across the league, then you gotta handle an embarrassing loss much better than this.