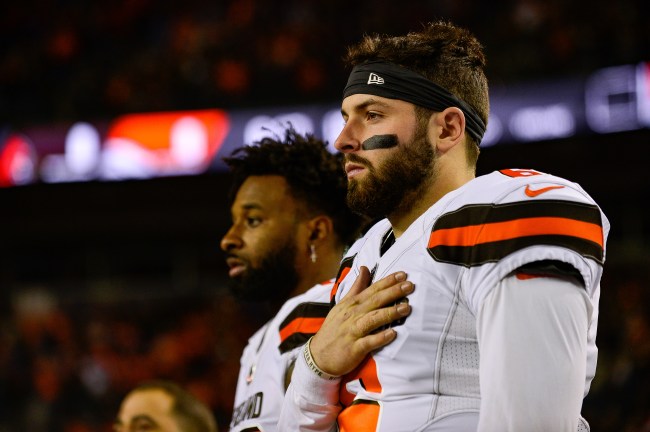 James Holzhauer won the second-most prize money in Jeopardy history, winning $1.6 million during his 32-day run on the popular game show. But while Holzhauer only finds himself trailing Ken Jennings on the all-time list of highest earnings for being brainiacs, the 34-year-old has made his living as a professional sports gambler — which sounds like a pretty incredible job title if you ask me.

Given his knowledge of the sports gambling industry, longtime NFL writer Peter King wanted to get an idea of what James Holzhauer thought about some of the current Super Bowl 54 odds that are floating around — with the Patriots having the best current odds at lifting the Lombardi Trophy next season. Of course, it’s all a damn crapshoot, but we’ve seen plenty of people walk away with big money after dropping bets on players and teams to win championships, so, if you have a gut feeling, you might as well take a risk.

However, in James Holzhauer’s mind, there’s one team not worth betting on to win Super Bowl 54: the Cleveland Browns.

That’s the team that “Jeopardy James” identified as the single-worst to place a bet on to win it all next season. Why? Simply put, because the longtime suffering franchise has been so trendy that the reward won’t nearly be as big as it would’ve been before the team overhauled its roster this offseason. Take a look at Holzhauer’s explanation below, as well as which teams he’d put his money to win it all, per Pro Football Talk.

“If I had to pick a team or two to make it to the Super Bowl, win the Super Bowl, the boring answer is the Patriots and the Rams,” he told me, sitting a table away from an octogenarian couple. They were nibbling at chicken sandwiches before noon Sunday. “Everyone knows these guys are the best teams out there. But if you’re looking to invest in a futures ticket, I would say that the big thing to avoid is look away from the teams that have all the hype surrounding them. I can’t believe we live in a world where the Cleveland Browns are the most hyped team in the preseason. But I would say they’re probably the single worst bet to win the Super Bowl right now.”

With the Browns adding flashy offensive weapons like Odell Beckham Jr. and Kareem Hunt to an already up-and-coming roster with the likes of Baker Mayfield, Nick Chubb, Jarvis Landry, Denzel Ward and Myles Garrett, among others, it’s no wonder so many, including Garrett, thinks Cleveland could be building something big over the next few years. And while James Holzhauer isn’t saying the Browns won’t win Super Bowl 54, he is saying that, if you want to make money on a bet, it’s not worth joining everyone else and start hopping on the Cleveland train this year after the team’s odds have moved up.