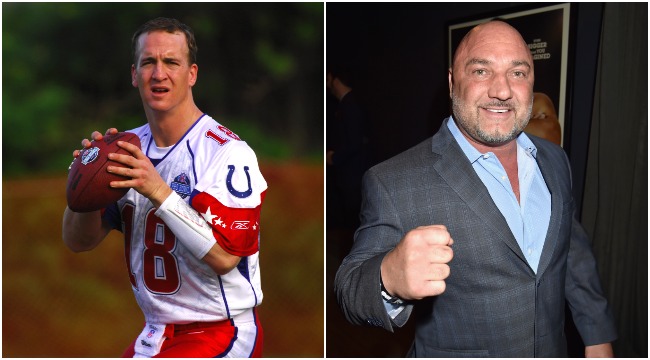 It is a damn crying shame that for the seventh straight year, Super Bowl Champion and 9-time Pro Bowler John Lynch was snubbed on a Hall of Fame induction, especially since he has achieved something no other player at his position has ever sniffed:

During the 2007 Pro Bowl, a group of courageous men including Fox’s Jay Glazer and Ronde and Tiki Barber began boozing at 9 am in an attempt to shatter the Bucs legend’s record, but instead nearly shattered their jaws.

Well into the day, a blaster Glazer nearly came to blows with Peyton Manning over after The Sheriff cracked a joke about his good friend Michael Strahan. This resulted in a melee that included UFC legend Chuck Liddell.

Glazer recalled that infamous day on Thursday’s episode of our Endless Hustle Podcast and it was a doozy:

“I got the bartender to open up early. Tiki bailed out after freaking four, at line noon. We started at 9 in the morning. Hutch and I, our girls made us stop at 5 pm. And we were like, ‘You can’t make us stop!’ Steve and I lost out on that argument, but then Ronde kept going.

So we’re up in the Hakalulu lounge after and I’m waiting for Chuck Liddell to meet me…I think Chuck was still champ. So Peyton and I kind of get into it up there. We’re drinking. We get into it.

Man, I just kind of snapped on him and I won’t tell you what we said, but a couple of them pulled me away from him. It was Eddie George, Lorenzo Neal, Sean Payton pulled me away from him and his buddy jumped in for him. Well my buddy jumped in for me, and my buddy was Chuck Liddell. So all the sudden his friend was like, ‘Whoop’ and walked over here and then Peyton’s like, ‘Oh my God.’ I’m just kind of a pitbull.

My sick mind is wishing I could be doing this today with @ChuckLiddell to start off the week. Holding for Chuck’s elbows. those are F*cking ELBOW strikes people, not even punches. The look on my face at the end says it all. I’m a moron for training my friends. @Unbreakable pic.twitter.com/eUHjsjYNHT

The whole thing started because he started talking about Strahan and that’s my brother. So I can say what I want about him, but I’ll be damned if someone else talks about him like that. So he kept getting after Michael, and I was like, ‘What did you say about him?’ How about you never mention Michael Strahan’s name out of your mouth ever again.

Then the ‘F-you’s’ started flying and then lobbed some threats. It was funny because the people that were there were like, ‘Listen you were standing for who you thought was your brother. We have no problem with this, we have no issue.’