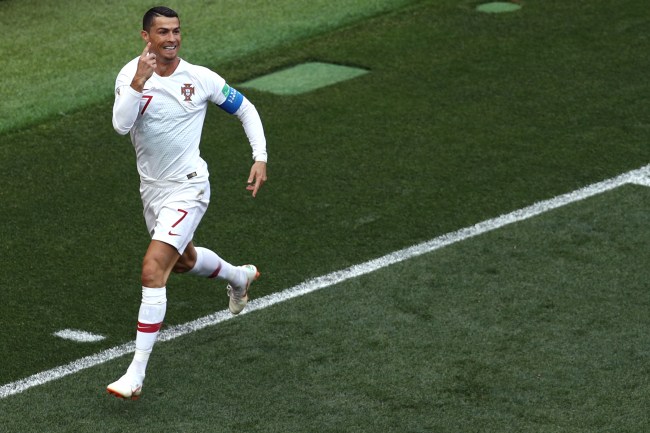 MOSCOW, RUSSIA - June 20: Cristiano Ronaldo #7 of Portugal celebrates after scoring a goal during the 2018 FIFA World Cup Russia group B match between Portugal and Morocco at Luzhniki Stadium on June 20, 2018 in Moscow, Russia.(Photo by Maddie Meyer/Getty Images)

Cristiano Ronaldo has signed a 4-year contract with Serie A club Juventus worth $50.5 million/year. In addition to the annual salary, Juventus will pay Ronaldo’s former club Real Madrid a transfer fee of $140 million bringing their total investment in the Portugese futbol star to more than $340 million. Ronaldo, who earned $61 million last season, is taking a pay cut to join Juventus.

Howie Long-Short: JVTSF shares popped +31% ($1.34) on Tuesday’s news that Ronaldo had officially signed, before closing at $1.18 (+16.25%). The stock has climbed +42% over the last week; word that Ronaldo could be leaving Spain for Italy first broke on Monday July 2nd.

I wonder if enthusiastic JVTSF shareholders are aware that Italy’s council of ministers recently approved a ban on gambling advertisements (existing agreements can be fulfilled), within the country, come 2019. They should be, because the ban extends to soccer clubs sponsored by gaming companies. More than half of Serie A teams currently have deals in place with gambling related companies and the pending loss of those sponsors has begun to cause “extreme worry” within the league. It’s been estimated that the ban could cost the teams more than $821 million.

In February, JVTSF reported half-yearly financials for the first half of 2017-2018. The franchise posted profits of +/- $50 million. Unlike publicly traded American pro franchises, JVTSF revenues/profits are “strongly influenced by the performance of sports results and in particular the UEFA Champions League”. This past season the club reached the Champions League quarterfinals, before losing to Real Madrid.

Ronaldo may be the best player in the world, but the annual value of his team contract lags far behind both Messi ($84 million) and Neymar ($73 million). However, when you add the $47.5 million/year (most of any futbol star) he makes from endorsements, appearances and licensing, Ronaldo becomes the 2nd highest paid soccer player in the world; Messi remains 1st taking in $111 million/year.

It’s possible (if not likely) Ronaldo will appear against his current squad on American soil. Real Madrid is scheduled to play Juventus in the International Champions Cup in Washington D.C. on August 7th.

There should be a few other opportunities to see Ronaldo in the U.S. this summer. Juventus will make appearances in both Philadelphia (July 25, vs. FC Bayern) and Harrison, NJ (July 28, vs. Benfica); and will take on the MLS all-stars in New Orleans on August 1.

Comcast (CMCSA) is reportedly lining up buyers for 21st Century Fox’s (FOXA) regional sports networks to alleviate anti-trust concerns, as it prepares a bid that would be favorable to The Walt Disney Company’s (DIS) $71 billion dollar offer (cash and stock) for FOXA film & TV assets. CMCSA is open to divesting all 22 RSNs, but believes just 8 overlap with the existing Comcast sports footprint. Reuters is reporting that the company has held conversations with publicly-traded buyout firms Apollo Global Management (APO) and Blackstone Group (BX). Just 2 weeks ago, the U.S. Department of Justice approved DIS’ bid after reaching a settlement with the mouse house to rid itself of the regional sports networks.

Howie Long-Short: It’s been assumed that the RSNs will fetch $20 billion+ (Comcast’s first bid placed a $24 billion valuation on them), so selling them off will help Comcast coffers as the company prepares to submit a 2nd all-cash bid (no dollar amounts given). FOXA shareholders are scheduled to vote on the DIS bid on July 27th, Comcast will submit their bid prior.

Rumors of P.E. firms taking down the RSNs is relatively surprising as most of the discussions surrounding potential landing spots having focused on telecom and media companies. Everyone from Amazon (AMZN) and YouTube (GOOGL) to AT&T (T) and Dish Network (DISH) has been mentioned.

I asked T.K. Gore, sports media consultant, advisor and professor, for his thoughts on who lands the RSNs?

T.K.: The RSN world is a tricky business and experience — coupled with deep pockets — matters. Look for groups like Liberty Media and AT&T to get involved given their experiences.

MSG is among the companies that has been associated with having interest in the regional networks. James Dolan has said that he’d be interested in acquiring the assets “at the right price”, noting they’re highly profitable now but a “slow, declining revenue stream.”

Fan Marino: The 22 RSNs collectively control exclusive broadcast rights to 44 NFL, NBA, MLB & NHL franchises, including teams in Detroit, Southern California, Dallas, Cleveland and Miami. The YES Network is the most valuable of the lot, worth an estimated $4 billion; the Yankees are likely to re-acquire that network.