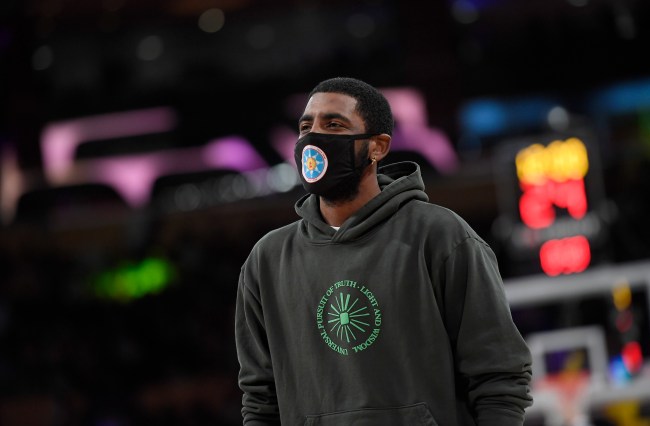 The Brooklyn Nets are the top team in the Eastern Conference, but they have been missing one of their key pieces all year. If Kyrie Irving’s Instagram is any indication, that could change soon.

In an Instagram post that could mean he’s getting close to a return or could mean absolutely nothing, Kyrie threw on a pair of sneakers as if he was getting ready to play.

Kyrie Irving posted a video of himself putting on basketball sneakers one day after reports that he may return to the court this season 👀 @brkicks pic.twitter.com/TK8d6idJPJ

The video itself wouldn’t normally be enough to spark rumors, but the timing of it is very interesting. It was just yesterday that reports started to surface that there is renewed optimism in a potential return for Kyrie.

A return for Kyrie would mean one of two things. Either Irving would have to get vaccinated or he would only be able to play road games for the Nets.

Even just road games would be seen as a boost for a Nets team that has been carried by Kevin Durant’s heavy workload. Kyrie’s return would take some of the weight off of Durant’s shoulders and maybe give the Nets a chance to win without him racking putting in a 40 minute shift.

One thing is for certain in this video. Kyrie is definitely going to play basketball somewhere. Just look at the rest of his legs. I know it’s cold on the east coast right now, but that doesn’t look like he’s just going to get some coffee.

Now the question is just where Kyrie is going to play and whether it’s to get ready for a return to the Nets or just for love of the game.