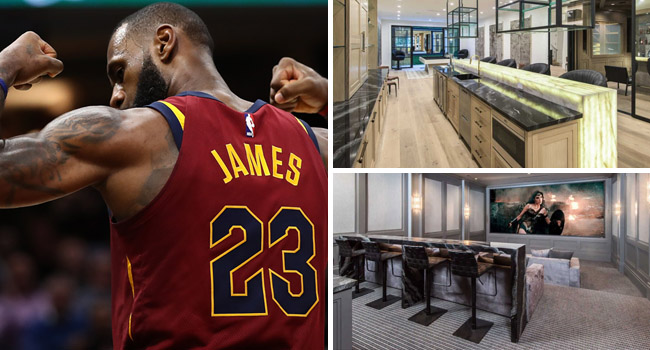 Back in 2015, LeBron James bought a ridiculously lavish $21 million mansion in Los Angeles spurring all sorts of rumors about him eventually playing for the Lakers. Two years later and those LeBron to the Lakers rumors are still floating around. And they’re about to get even worse.

First, here’s the $21 million mansion James bought in Brentwood back in 2015.

And here’s the $23 million, 15,846-square-foot mansion he just snagged, once again, in Brentwood.

According to Trulia, where you can view even more pics of the inside of James’ luxurious new eight-bed, eleven-bath crib…

With stunning views stretching from Downtown Los Angeles all the way to the ocean, LeBron’s new digs were just constructed in 2017. Tucked behind gates up a long driveway, the traditional-style home is a masterpiece of light and design.

Step inside to the soaring great room and custom chef’s kitchen, where natural French oak and marble floors reclaimed from Spain create the ultimate sense of luxury. Upstairs, there are four en suite bedrooms, including the luxurious master suite with dual bathrooms, showroom-level walk-in closets, and a private patio.

There’s also an auto gallery, because true ballers have no need for normal garages. A guest suite and an indoor/outdoor gym connect to a spa with a steam room, sauna, shower, and massage room.

Sliding pocket doors off the main level create an indoor/outdoor flow to a stunning backyard with a rolling grass yard, oversized pool and spa, as well as a heated dining loggia and outdoor kitchen with a BBQ and beer taps.

Sounds like James will have plenty of room for his buddies and new Lakers teammates Russell Westbrook and Paul George when they too move to L.A.

Methinks the answer is most definitely “yes.”