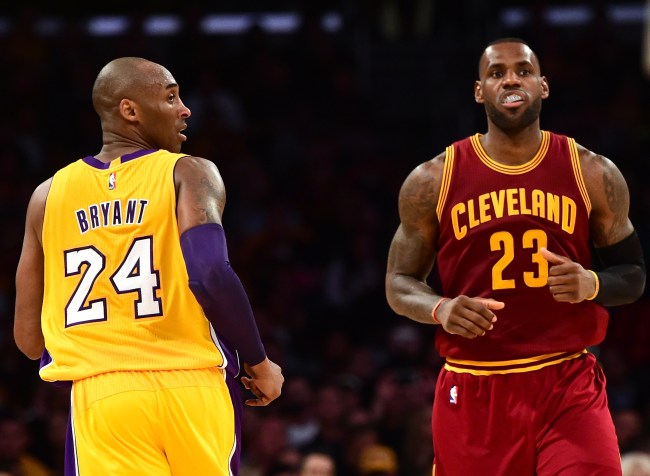 LOS ANGELES, CA - MARCH 10: LeBron James #23 of the Cleveland Cavaliers and Kobe Bryant #24 of the Los Angeles Lakers match up during the first half at Staples Center on March 10, 2016 in Los Angeles, California. NOTE TO USER: User expressly acknowledges and agrees that, by downloading and or using this Photograph, user is consenting to the terms and condition of the Getty Images License Agreement. (Photo by Harry How/Getty Images)

LeBron James’ signing (4 Years, $153.3 million) with the Los Angeles Lakers is expected to boost Nike retail sales as the company is both the league’s official jersey manufacturer and James’ footwear outfitter. According to NPD Group, no NBA player sold more basketball sneakers in 2017 than LeBron, a figure that includes sales of both his signature line (LeBron 15) and Soldier series. However, the move is expected to have the biggest impact on jersey sales, not footwear; Fanatics reported that presale orders (NBA store sold out) rose 600% in the first 3 hours following James’ announcement relative to his return from Miami to Cleveland in ’14.

Howie Long-Short: LeBron’s impact on sneaker sales is likely to be minimized by both trends (basketball sneakers aren’t considered to be in fashion) and the market he’s headed to. As NPD Group analyst Matt Powell explains, “L.A. is not an important basketball shoe market”; performance styles sell best in the Northeast.

Wish, an e-commerce application, should also benefit from James’ relocation to Hollywood; the company is the Lakers’ jersey sponsor (for at least the next 2 seasons). According to GumGum (AI company with expertise in computer vision), no company received more value ($21 million) from earned media impressions on social media platforms (only includes content shared by team accounts) than Goodyear (the Cavs jersey sponsor) did during the 2017-2018 season. Wish finished 4th among jersey sponsors, despite the Lakers missing the playoffs and lacking star power.

Wish has raised $1.3 billion to date, but the only way to play the company is via China Everbright; a Hong Kong based financial services company. China Everbright and IDG Capital Partners (PE) launched a joint venture known as Everbright-IDG Industrial Fund; together they led Wish’s $500 million Series F round in November ’16. China Everbright trades over the counter under the symbol CHFFY.

Fan Marino: If you purchased LeBron’s Cavaliers jersey on Fanatics within the last 90 days (or with an AMEX within the last 12 months), you’re eligible for the site’s Jersey Assurance program. The program gives fans the opportunity to exchange the jersey for another player on the team (i.e. Collin Sexton) or the new player’s new jersey (LeBron Lakers) at no charge. However, paperwork for the exchange must be submitted within 14 days, so the clock is running!

It should be noted that despite the assumption LeBron would be leaving Cleveland at the end of the season, his jersey was the 2nd best-selling in the NBA during the postseason (behind Curry) and sales were up 25% YoY during Q2 ‘18.