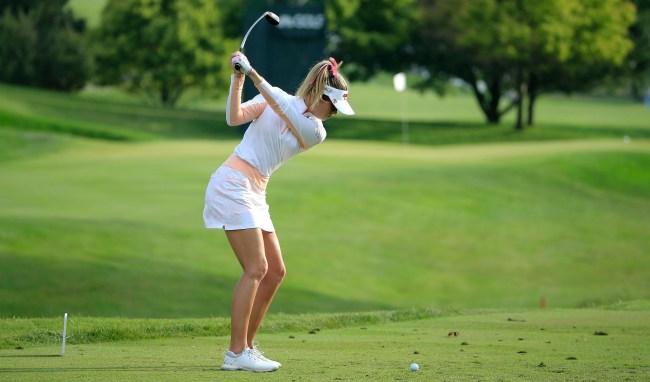 We have taken a look at a lot of ridiculously cool celebrity homes over the past several years, but, for some reason, we have rarely had the opportunity to see homes situated on golf courses like this one LPGA star Paula Creamer is selling in Windermere, Florida.

Creamer, who has earned 10 LPGA victories, including the 2010 U.S. Women’s Open, and over $12 million in career earnings (10th all time, plus who knows how many more millions in sponsorship), originally paid $5.25 million for the home on the 15th hole of the Isleworth Golf & Country Club.

Now she asking for $6.35 million to part with the massive 11,100-square-foot mansion with views of Lake Butler in the Sunshine State.

This one of a kind three story home has been completely renovated and is perched high above the famed Butler Chain of lakes offering one of a kind water views. Featuring 6 bedroom suites, a movie theater, huge game room, personal elevator, wine cellar, fitness room, private generator, and a beautiful office, this house has something for everyone.

The minute you walk through the front doors your eyes are immediately drawn to the soaring two story windows, massive stone fireplace, and inviting second floor balcony which is perfect for viewing the spectacular sunsets. The chef in the family will love the kitchen with its large center island, separate prep sink, Wolf 6 burner gas range, built in espresso machine, a large Sub-Zero refrigerator/freezer, and a large dining area. The main floor also includes a private master retreat with a separate sitting area, and a massive spa bath with a one of a kind closet that will hold even the largest clothing collection.

The private boat dock features maintenance free Trex decking and separate lifts for a boat and a jet ski. Whether you are into boating on the lake from your 150 feet of pristine lake frontage or like the fact that you can pull straight out of the driveway onto the golf course, this is truly a remarkable home.

And according to the home’s listing on Realtor.com, it can all be yours for somewhere around $34,442 a month in mortgage payments, with a small $1.27 million down payment, of course.

Before you decide, here’s what the property looked like inside and out five years ago…