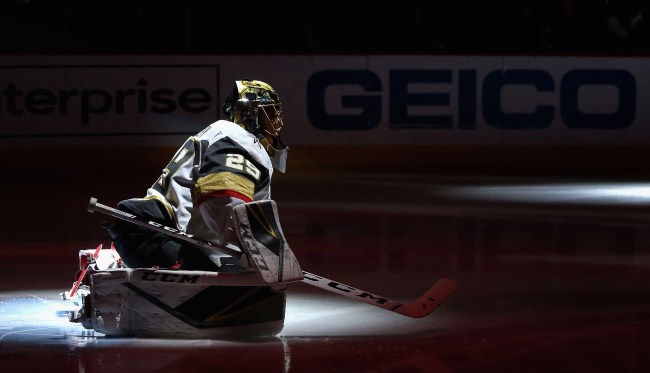 After being chosen to represent Las Vegas during the 2018 NHL All-Star Game, goalie Marc-Andre Fleury must be looking to make a move up in the real estate world. I suppose every place pales in comparison to living with Mario Lemieux after being drafted by the Penguins. (Especially if it was in the castle.)

Regardless of the reason, Fleury is looking to unload his home in the Southern Highlands area of Las Vegas for a very reasonable $2.5 million.

If you are thinking about buying it, you might also be interested to know that prior to Fleury owning it, the home was also owned by former Ducks and Canadiens defenseman Sheldon Souray. A house with hockey heritage!

The 5,285-square-foot house also features a formal dining room, an open-plan gourmet kitchen, a den with a fireplace, an office, five bedrooms and 4.75 bathrooms, according to the Los Angeles Times.

The key to the home though might be the sweet private backyard with a pool and spa, a fire pit with seating area, a built-in BBQ, two verandas, and a casita.