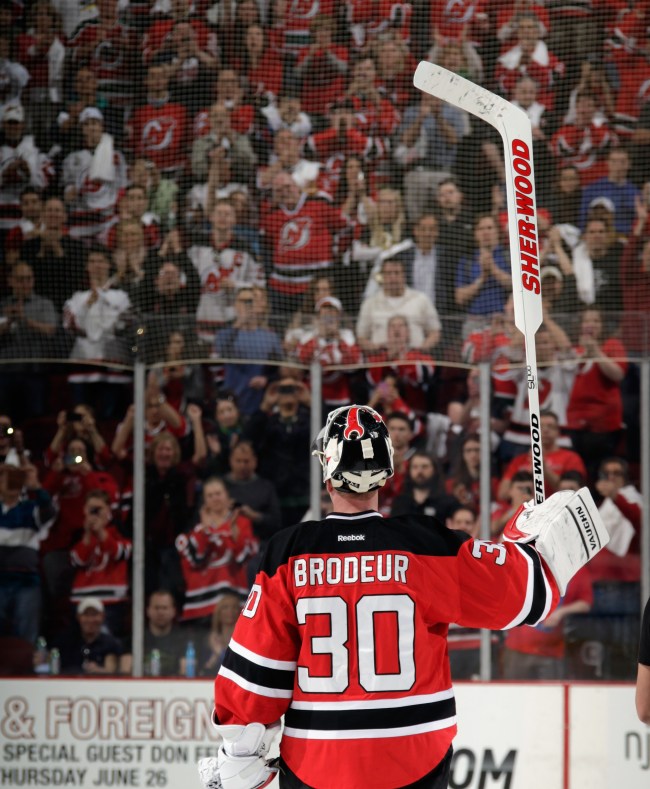 NEWARK, NJ - APRIL 13: Martin Brodeur #30 of the New Jersey Devils salutes the fan while leaving the ice following a 3-2 victory over the Boston Bruins at the Prudential Center on April 13, 2014 in Newark, New Jersey. There has been speculation that this could be Brodeur's final game with the team. (Photo by Bruce Bennett/Getty Images)

2018 Hall of Fame Inductee Martin Brodeur is returning to the New Jersey Devils as the club’s EVP of Business Development. The 4x Vezina Trophy winner won’t be tasked with player personnel decisions during this homecoming though, he’s back to work under Harris Blitzer Sports & Entertainment and NJ Devils President Hugh Weber on the business side of the organization. JohnWallStreet had the chance to sit down with the 9x All-Star Wednesday on afternoon for an extended interview. In part 1 of a 2 (part 2 will run tomorrow Friday 8.31), I asked why retired athletes are taking business roles, where he’s prepared to help the organization and what he can do to raise NHL MVP Taylor Hall’s profile.

JWS: Having spent the last 2 seasons as the AGM in St Louis, I think most hockey fans just assumed your next stop was to become a General Manager. Why the pivot?

Martin: I think it’s hard to get a job as a General Manager. There’s only 31, soon to be 32 of them within the league. I enjoyed my time in the front-office, but the time-consuming part of the job was something that I was a little reluctant to commit to; not because I don’t want to work, but because I just retired and have an eight-year-old at home.

The role with the Devils is not straying away from what hockey’s all about. You’re (franchise business executives are) still part of the hockey team, just in a different kind of role; you still care about the organization that you work for. I’m not sure I would have done it (take a business-side role) somewhere else, but with ownership, the team on the ice and the team in the front office all moving in the right direction now in New Jersey, it’s a good place for me to get my feet wet.

JWS: It’s not uncommon to find retired athletes in talent evaluation roles, but several (think: Jeter, Luc Robitaille) have taken business development or operational jobs over the last couple of years. What’s driving more guys towards the business side of sports?

Martin: The winning and losing gets old after a little bit. The business side is about looking forward – looking two, maybe three years down the road – trying to put the club in the best position to be successful. The people (on the business side) aren’t worried about winning and losing. We played at such a high level, for so long, that it’s nice to take a step back and not worry about what happened last night. You still do because that’s just the nature of things, but when they’re on the road you don’t really feel it (a loss) as much (laughing).

JWS: You’ve said this role isn’t about shaking hands and taking pictures. Where do you feel you’re prepared to help the club on Day 1?

Martin: Well, that’s part of it (laughing). I think I can help with the promotion of the game, not just in New Jersey but helping to grow our brand on the international level (editor note: more on this tomorrow).

JWS: I’m glad you brought up promotion. Devils star Taylor Hall won the Hart Trophy but even the biggest sports fans would have difficulty picking him out of a lineup. What can you do to help raise his profile?

Martin: The social media aspect of it is going to be really important for him. I know it’s all cute and games when you send tweets, but he’s really going to have to get involved in the community. There’s such a big opportunity for the players to connect with the fans on that platform (Twitter) and they don’t always want to do it, so I think teams need to place more emphasis on player brand development. You don’t want them (the players) to be overwhelmed by it (social media), but as I told a player earlier, the reporters or the at-large media are talking about x’s and o’s; they don’t talk about you personally. I think it’s such an easy thing for players to do to increase their profile. The league obviously needs to do more to promote their players, but it’s going to get easier and easier to promote Taylor because he’s a spectacular hockey player. He’s a highlight reel every time he touches the puck.

Fan Marino: The Devils shouldn’t have much trouble moving merchandise this year. In addition to having marketable stars in Hall and former #1 overall pick Nico Nischier, the club is bringing back its original red and green uniform for the 1st time in 26 years. They’ll wear the “heritage” uniform for 4 home games during the ’18-’19 season. I’ll certainly be buying a white sweater; the only question is can they fit 14 characters (JohnWallStreet) on the back?

Here’s a fun fact for you, though Brodeur hasn’t played for the franchise since ’14, his jersey remains one of Fanatics Top 5 selling jerseys for the NJ Devils.