McGregor Banned from Selling Sportswear With Last Name in Europe 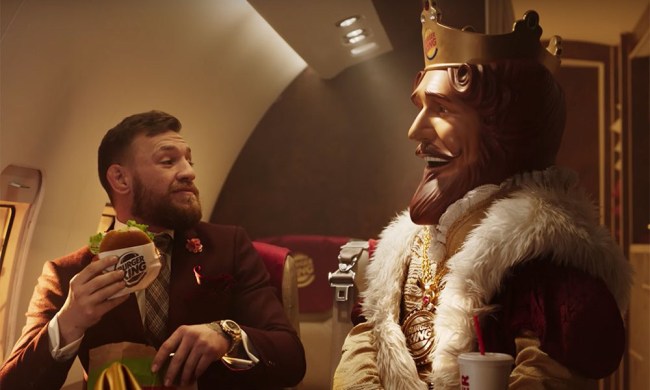 McGregor Banned from Selling Sportswear with Last Name in Europe

Conor McGregor has been ordered to halt sales of sportswear bearing his surname following a legal battle that determined the UFC fighter has been in violation of EU-wide trademark law. The Scottish fashion label McGregor, founded in 1921, issued an injunction against Adidas (and subsidiary Reebok) out of concern that consumers would believe sportswear made for the Notorious One was produced by the near hundred-year-old fashion house; the company also does not want potential customers to think it sponsors Conor. Adidas/Reebok, which hold the exclusive rights to McGregor’s line, will be required to withdraw garments sold in Europe or compensate the fashion label. It’s worth noting that the parent of McGregor’s fashion brand, Doniger Fashion Group, filed for bankruptcy for a 2nd time in September ’17; McGregor does not currently operate a working website.

Howie Long-Short: Moody’s credit service indicated that ’17 was the most lucrative year in UFC history, reporting the company generated “well over $700 million”. Even if you take Moody’s mathematics at face value (questionable, considering the UFC had 5 PPVs with 1 million buys in ’16 and 0 in ‘17) and account for the UFC’s newly signed $1.5 billion U.S. broadcast TV deal, Dana White’s claims of a $7 billion valuation seem far-fetched. WWE pulled in more money ($800.96 million) in ‘17, has larger TV deals ($2.3 billion for RAW and SmackDown Live), carries far less long-term debt and yet maintains a market cap of just $6.3 billion.

Fan Marino: In addition to having 0 PPV events with 1 million buys thus far in ’18 (that will change with McGregor fighting on Oct. 6), the UFC has failed to draw on cable television. UFC on Fox 30 (July 28, 2018) was the lowest rated (1.0) and least-watched (1.68 million) MMA telecast ever broadcast in primetime, surpassing previous lows set in January (UFC of Fox 27). The ratings for the main event (Dustin Poirier vs. Eddie Alvarez) declined 20% from the promotion’s July ’17 card and they tied a series low within the 18-49 demo (0.6 rating).

Speaking of the McGregor/Khabib fight, TicketIQ is reporting that UFC 229 is the 2nd most expensive UFC ticket since at least ’10. The get-in price is $729. Only UFC 205 (McGregor vs. Eddie Alvarez) cost more ($768) to walk in the door.

West Virginia will become the 5th state (NV, DE, NJ, MS) to offer legalized sports betting when the sportsbook at Hollywood Casino at Charles Town Races open on September 1st. It appears as if Hollywood Casino at Charles Town Races will be the only sportsbook in operation for the start of college football season (Sept. 1); The Greenbrier, Mardi Gras Casino and Wheeling Island Casino have yet to announce when their sportsbooks will open. Interestingly, the WV sports betting bill became law without the Governor’s signature; Jim Justice insisted the law include an integrity fee for the leagues, 2 of which hold training camps at his family’s The Greenbrier property.

Howie Long-Short: Hollywood Casino is owned and operated by Penn National (PENN), William Hill (WIMHY) will set to run the sportsbook there. As noted, The Greenbrier is family owned; FanDuel (PDYPY) will run their sportsbook operations. Those 2 venues expect to do well with fans from “Virginia, Maryland and Washington D.C.” all likely to make the short drive without legalized sports betting closer to home.

Mardi Gras Casino (Charleston) and Wheeling Island Casino (Wheeling) are under the control of privately-held Delaware North. Wheeling’s location puts it in position to pull out of state clientele from Pennsylvania and Ohio.

Fan Marino: The Action Network CEO Noah Szubski made headlines late last week for proclaiming his company was sitting on a billion-dollar business model, saying, “if I have 8 million qualified users spread around the country and each one can legally bet through a book and there’s an affiliate fee and a percentage of lifetime money, that’s the billion-dollar business.” Sure, except The Action Network’s value proposition is providing content that, in theory, makes bettors more likely to cash in. Why would a casino pay an affiliate fee to acquire a +$ bettor? Szubski may also want to “see the international online gambling market for a clearer sense of how operators define [lifetime] when it comes to affiliate revenue share (spoiler: it’s not lifetime).” – Chris Grove –  gambling industry analyst, Eilers & Krejcik Gaming.

There’s another issue with Szubski’s theory. Sportsbooks in Europe have been refusing to take bets from intelligent bettors and are placing betting limits on others. Once a gambler starts winning, the sportsbook shuts them down; that practice won’t help The Action Network subscriber retention rates and if U.S. sportsbooks are going to use betting limits on heavily restrict sharp money, The Action Network is going to be taking its percentage from a much smaller pie.

Wondering which book has the worst reputation among sports bettors for refusing to take bets? William Hill. One pro sports bettor interviewed by ESPN (among 20 U.S. gamblers banned by the company) said, “they’re by far the worst”. That would be music to my ears, if I’m a William Hill shareholder. It’s worth mentioning that most states do not have laws preventing a casino from turning away a skilled bettor.