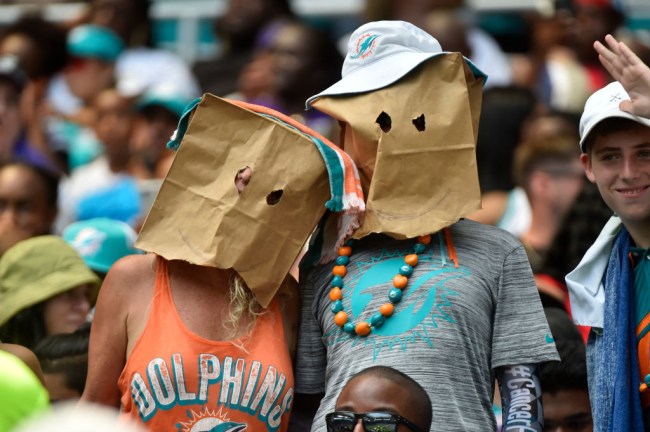 On Sunday, the Miami Dolphins proved they are who we thought they were when they got absolutely clobbered by the Ravens by a score of 59-10 in front of a laughably small crowd populated by masochists who probably should have seen the loss coming (even if no one expected Lamar Jackson to put on the show he did).

Before the season started, head coach Brian Flores did his best to convince the world the team isn’t tanking in an attempt to land Tua Tagovailoa, who the Dolphins would likely draft in an attempt to replace Ryan Fitzpatrick if they manage to land the first pick.

However, it appears multiple members of the team aren’t buying it, as a number of players reportedly reached out to their agents in an attempt to get traded to a team that’s not poised to embarrass itself on a weekly basis.

It’s pretty doubtful the Dolphins are going to manage to turn things around this weekend, as they’re facing off against the Patriots and listed as 19-point underdogs, which is a spread we haven’t seen in quite some time.

Now, it appears there’s one person who’s very confident the Dolphins will never be able to turn things around this season, as a bettor reportedly dropped $3,400 at a sportsbook that will net them over $100,000 if the Dolphins follow in the footsteps of the 2008 Lions and the 2017 Browns by going 0-16.

Sure, it’s far from a sure thing, but given how things are currently looking, there are certainly worse bets you could make (like dropping $165,000 on the Panthers to cover the spread last night).