Take A Look Inside The Massive Park City, Utah Home Michael Jordan Is Selling For $7.5 Million 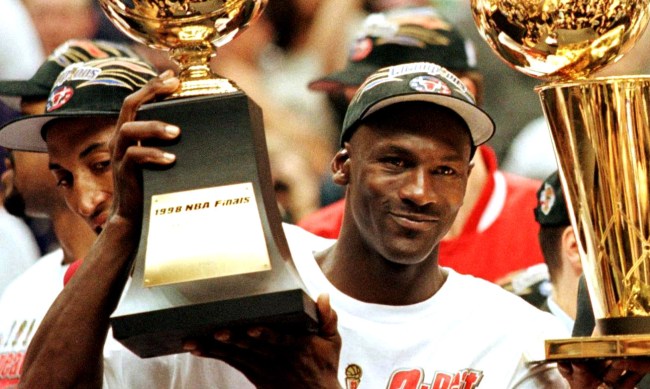 Considering the two daggers Michael Jordan and the Chicago Bulls put in the Jazz in the NBA Finals of 1997 and 1998, saying His Airness owned Utah wouldn’t be completely inappropriate.

Today, however, Jordan is looking to sell Utah, as in his 9,574-square-foot home in Park City.

The luxurious home, built in 2006, is smack dab in the middle of where the rich people like to play, both on skis as well as with the sticks.

According to the retreat’s listing on Realtor.com…

It is modern elegance in mountain serenity. Stately yet intimate, this one-of-a-kind treasure is tucked into the hillside and surrounded by 3.93 peaceful acres. In every direction there are breathtaking views of the Glenwild Golf Course and the Wasatch Mountains. This 5-bedroom, 7-bath home includes sumptuous details like Italian marble and bamboo flooring, granite countertops, Swiss Pearwood and Macassar ebony veneer cabinets and shelves, mosaic-tiled showers and jetted bathtubs, winding staircases, round-angled vaulted ceilings, windows from floor to ceiling, glass garage doors, cascading waterfalls, golf simulator, stadium seating theater, and even copper roofing and an infinity pool. All of which blends seamlessly with its natural, Wasatch Mountain surroundings.

MJ is also selling the furniture if you’re interested, and why wouldn’t you be? If you’re going to drop $7.5 million on a new home, wouldn’t you just throw in a few thousand more to be able to tell visitors that none other than Michael Jordan may have sat in that chair?

Speaking of money, Jordan’s Park City retreat will run you about $37,202 a month in mortgage payments, with a $1.5 million down payment.

Sounds like a great deal. Anyone want to go in on it with me?