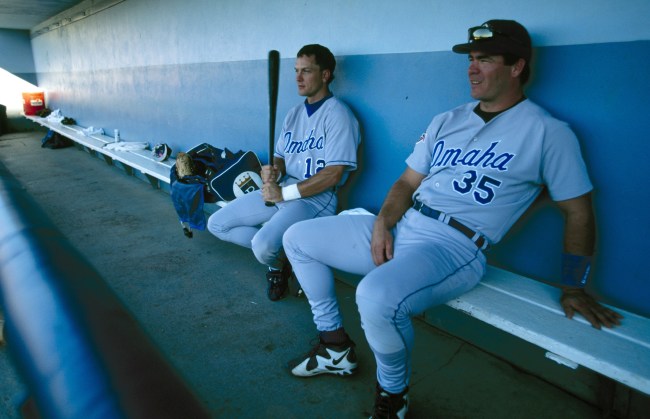 ALBUQUERQUE, NM - AUGUST 8: Shane Halter #12 and Chris Hatcher #35 of Omaha Royals watch the action from the dugout during a AA Minor League game against Albuquerque Duke on August 8, 1998 in Albuquerque,New Mexico. (Photo by Marc Piscotty/Getty Images)

Major League Baseball players are making more money than ever, with the average salary topping $4 million for the 1st time last year, but most of their minor-league counterparts are living well below the poverty line. Aware of the vast pay gap and plight of MiLB players, MLB chose not to revamp the pay scale, but to pursue legislation that would preserve the status quo (technically they agreed to raise the min. by $60); and it passed as a last-minute addition to the 2,200-page federal spending bill that was rushed through Congress in March. Tonight (July 24th) at 10p EST, HBO’s Real Sports with Bryant Gumbel examines why MiLB players are “Playing for Peanuts”.

Howie Long-Short: While major league salaries have multiplied 5x over since 1984 and team valuations have grown 20-fold, MiLB player salaries have decreased over the last 25 years (accounting for inflation); Real Sports is reporting that “the majority of” minor league players are earning just $7,500 annually. $7,500 isn’t just below the poverty line ($12,140), it’s less than half of what a full-time minimum wage worker collects ($15,080).

Major League Baseball revenues eclipsed $10 billion for the 1st time in 2017, but Commissioner Manfred argues that the league could not operate if it had to pay MiLB players more money; a joke considering the biggest companies in the world manage to comply with federal minimum wage laws. Here’s a fun fact: MLB could pay every one of the 6,500 minor league baseball players an additional $22,500/year (raising min. comp. to $30,000) for less ($146 million) than what the Astros will pay Jose Altuve ($151 million) to play through ’25.

For those wondering, the “Save America’s Pastime Act” (yes, they’re serious with that name) simply requires MLB to compensate MiLB players for 40-hour work weeks during the season; spring training, off-season conditioning and any “overtime” in season can remain unpaid.

Fan Marino: While MiLB player compensation (and the league’s handling of it) is disturbing, the NBA’s G-League has quietly become a viable alternative to NCAA basketball. In addition to the round-the-clock, world-class coaching, at least two-thirds of the league’s players now make $70,000 (+ housing & medical); more than a respectable living for 5 months of work. That’s not the ceiling either. The NBA added roster spots for 2-way players last year – those designated to split time between their G-League team and NBA affiliate. 2-way players can earn up to $385,000/season. The G-League’s min. player salary is $35,000.

CLEAR Partners with MLB, Biometric Technology Coming to Ballpark Near You in ‘19

CLEAR has signed a deal to become the official biometric identity and ticketing provider of Major League Baseball. The partnership, in conjunction with Tickets.com (MLB owned, primary ticketing partner for 23 teams), will give fans a “faster, more secure entry experience” by “eliminating the need to present a paper or mobile ticket.” Fans who link their CLEAR profile with their MLB.com account will be able to gain entry, pay for food/drinks and validate their age “with just the tap of a finger or, in the near future, facial recognition technology.” CLEAR technology will be implemented at select stadiums this summer, with broader roll-out (at parks that use CLEAR and Tickets.com technology) expected in ’19. Financial terms of the deal were not disclosed.

Howie Long-Short: Certified as a Qualified Anti-Terrorism Technology by the U.S. Department of Homeland, CLEAR made a name for itself in airports around the country before turning its attention to the sports world. Now the company has 13 professional sports partnerships including 9 with MLB teams (Braves, Rockies, Tigers, Marlins, Mets, Yankees, A’s, Giants and Mariners).

A privately held subsidiary of Alclear (acquired in ‘10 for $5.9 million), CLEAR has raised $35 million since October 2015. There are two ways to play the company, with both T. Rowe Price (TROW, led 2 rounds) and Delta Air Lines (DAL, led the 3rd round) having invested. TROW was the sole investor in the company’s most recent round ($15 million, closed in April 2017).

Speaking of TROW, the company reported that it brought in $11.3 billion in client cash in Q1 ’18 – the second-biggest quarterly haul in company history – increasing AUM by 2.3%. There’s a reason those that seek active-management want to invest with TROW. According to Bloomberg, the company’s Growth Stock Fund has outperformed 93% of its rivals since 2012. Shares hit an all-time high in June ($127.43). The company is expected to report Q2 earnings tomorrow.

Fan Marino: The addition of CLEAR technology isn’t going to bring fans to the ballpark (attendance is down 10%), but it does remove one of the many pain points (see: parking, cost of concessions etc.) associated with attending a game. More NFL teams should look to implement CLEAR technology (only Raiders have it). According to Tempkin Group’s Fan Experience Benchmark, the NFL currently offers fans the worst game day experience among the 9 pro sports leagues considered.