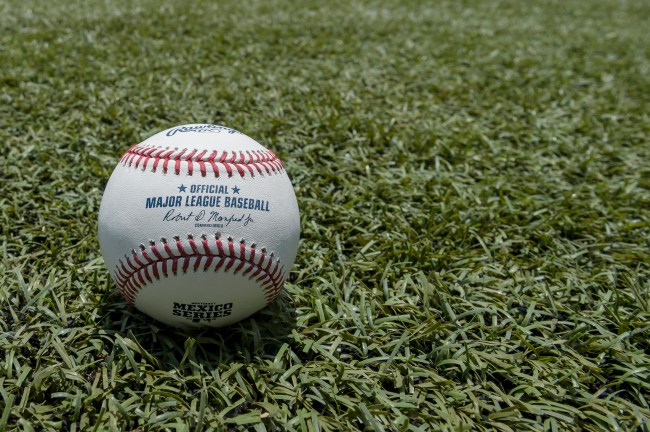 MONTERREY, MEXICO - MAY 06: Detail of the official game ball prior the MLB game between the San Diego Padres and the Los Angeles Dodgers at Estadio de Beisbol Monterrey on May 6, 2018 in Monterrey, Mexico. (Photo by Azael Rodriguez/Getty Images)

Seidler Equity Partners (private equity firm) and Major League Baseball (non-controlling interest) have acquired Rawlings – and subsidiaries Miken and Worth – for $395 million, from Newell Brands (NWL). The 131-year-old baseball equipment company has manufactured the league’s official game ball since 1977 and maintains the contract to supply the league with balls and batting helmets through 2021. MLB EVP for Strategy, Technology and Innovation Chris Marinak said the acquisition will give the league “even more input and direction on the production”, important with the league facing accusations that home run numbers have soared over the last 3 seasons because of “juiced baseballs.”

Howie Long-Short: Newell Brands acquired Rawlings as part of a $13 billion takeover of Jarden, back in 2013. That deal nearly doubled the St. Louis manufacturer in size ($11 billion in revenue over 1st 9 mo. of ’17 vs. $6 billion prior) but left it with $10 billion in debt, which explains why they’re shedding assets (see: Waddington Group for $2.3 billion) that don’t align with their 9 core consumer divisions (think: Sharpie pens to Crock-Pot cookware). NWL intends on using the sale’s proceeds (+/- $340 after taxes) to fund share buybacks and pay down debts.

Rawlings was considered the least valuable of the brands NWL wanted to unload. Deutsche Bank pegged the company at 8x EBITDA (+/- $360 million), so you can understand why President Michael Polk was “pleased with the agreement to sell Rawlings at an attractive multiple.” NWL shares are up +6% ($24.68 at Friday’s close) since news of the Rawlings deal broke, but remain down 20% YTD.

Fan Marino: Home run rates have unexpectedly soared since the ’15 season, with many claiming that today’s balls are bouncier, smaller and flatter-seamed – which lend them to jump off the bat and travel farther (i.e. reduced drag). There are those who argue it has more to do with the quality of today’s pitching, players altering the arc on their swings to hit fly balls and the elimination of the two-strike approach (think: plate disciple, shorter swing, avoid strikeout), but the surge in home runs is undeniable. In 2017, 14.2% of all balls hit left the yard (highest rate in MLB history) and teams mashed a MLB record 6,105 home runs (the previous record was 5,693 in ’00). The league has consistently denied there have been any alterations made to the ball.

Activewear brands and the retailers who sell their products have had a difficult start to 2018, as sales were “essentially flat between February and April.” NPD Group senior sports industry advisor Matt Powell attributes the struggles to “the proliferation of fashion brands emulating performance wear” (think: Moncler’s Grenoble collection, BIT: MONC); including high fashion labels like Isabel Marant that are now launching activewear lines. It’s not just the athleticwear labels (think: Under Armour – UAA, Columbia – COLM) that are hurting from the industry crossover though, athletic specialty/sporting goods stores are also struggling as “department stores now capture more activewear sales than the true sports channels.” Activewear is the fashion industry’s fastest growing category, expected to grow 6-7% in ’18; compared with 2-3% for the balance of the fashion and footwear industry.

Howie Long-Short: One company that has not been negatively impacted by the trend is Lululemon Athletica. LULU posted “astonishing” Q1 ’18 results, before increasing its full year financial forecast. Net income grew +141% YoY (to $75.2 million) on revenue that rose +25% YoY (to $649.7 million), with e-commerce growth (+62% YoY), new customer acquisition (+28% YoY, 30% of which were men) and a significant rise in gross margin (from 49.4% to 53.1%) highlighting the quarter. Shares popped 16% (to $122.19) following the June 1st report; they’re up 55% YTD and 135% over the last 12 months despite the February resignation of CEO Laurent Potdevin (workplace misconduct) and other public missteps (think: see-through tights). Adidas (ADDYY), Champion (HBI) and Patagonia were also all strong performers within the activewear category during the first quarter.

Fan Marino: While fashion brands are working to take activewear market share, activewear companies are taking up residency on 5thAvenue (NYC) alongside high-fashion retailers. Why? As Powell explains, “to be next to some of the most prestigious names in the industry really elevates the prestige of the athletic brands.” Adidas, Asics (TYO: 7936) and The North Face (VFC) already have stores open on 5th Avenue, Nike (NKE) and Under Armour have signed leases on space and Puma just announced it’ll be opening a 24,000 SF retail store on the street.