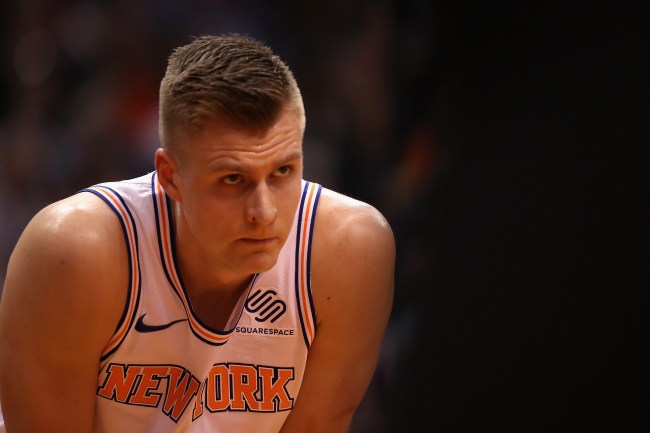 PHOENIX, AZ - JANUARY 26: Kristaps Porzingis #6 of the New York Knicks during the NBA game against the Phoenix Suns at Talking Stick Resort Arena on January 26, 2018 in Phoenix, Arizona. NOTE TO USER: User expressly acknowledges and agrees that, by downloading and or using this photograph, User is consenting to the terms and conditions of the Getty Images License Agreement. (Photo by Christian Petersen/Getty Images)

Madison Square Garden (MSG) is considering a tax-free spinoff of the Knicks, Rangers and other pro sports franchises (to be known as MSG Sports) from Madison Square Garden Arena, Radio City Music Hall and the balance of their concert-hosting and entertainment-venue operations. The proposed plan would give legacy shareholders 66% of MSG Sports. MSG would retain the remaining 33%. No timetable has been issued for the board to issue a decision. MSG shares hit an all-time high on Thursday, closing at $303.29.

Howie Long-Short: Should a split occur, MSG Sports would include the Knicks, Rangers, Westchester Knicks (G-League), Hartford Wolf Pack (AHL) and the Liberty (WNBA), though the team has been exploring a sale for that franchise on and off since November. The newly-formed entity would also include Knicks Gaming (NBA 2K League) and Counter Logic Gaming (esports).

MSG would hold on to Madison Square Garden and the Hulu Theatre, Radio City Music Hall, Beacon Theatre, the Forum in Inglewood, the Chicago Theatre and the Wang Theatre (Boston). The company’s hospitality group, a music festival producer, interests in Oak View Group development projects, stake in Tao Group (62.5%) and $1 billion in cash would also remain under the MSG umbrella.

JWS wrote about the need for a potential spinoff back in October and we again discussed how MSG’s market cap was lower than Forbes value of just the Knicks and Rangers in February; so, we’re on board with a spinoff that would bring full value of company’s assets to shareholders. We noted in October that there was speculation a spinoff could increase the value of the company by upwards of +25%; reports of the potential plan occurred on Wednesday evening, shares have skyrocketed +13.9% since.

Fan Marino: Sorry Knicks Fans, a spinoff doesn’t mean that James Dolan would finally relinquish control of the struggling NBA franchise; Dolan intends on serving as executive chairman and CEO of both companies.

The Department of Justice has approved The Walt Disney Company’s (DIS) $71.3 billion ($38/share, increased bid from $52.4 billion, includes +/- 50% in cash) acquisition of 21st Century Fox (FOXA) television and film assets, after reaching a settlement with DIS that calls for the company to divest FOXA’s 22 regional sports networks. U.S. A.G. (Anti-Trust Division) Makan Delrahim, concerned DIS’ control of the RSNs would create a potential monopoly, said that the settlement ensures “sports programming competition is preserved in the local markets where Disney and Fox compete for cable and satellite distribution.” The settlement, which requires DIS to divest the RSNs within 90 days of closing, requires approval from a judge; but that is a formality. DISintends on pursuing a 3rd party buyer for the RSNs, as opposed to submitting a new offer; FOXA is not thought to be interested in retaining the assets.

Howie Long-Short: DOJ approval gives DIS an advantage over Comcast (CMCSA) in the competition for the Murdoch empire, just two weeks after Comcast submitted an all-cash bid worth $65 billion ($35/share). While the approval alone won’t win DIS the assets (Comcast is expected to submit a counter offer), it won’t hurt considering it’s been thought the FOXA board has long preferred to sell the assets to DIS in the belief the Comcast bid is bound to face anti-trust concerns. That’s debatable. CMCSA would also divest the RSNs and FOXA’s stake in Hulu is really the only asset that might draw anti-trust concerns; and that doesn’t appear to be a major hurdle. It’s been thought FOXA assets could draw upwards of $43/share.

Fan Marino: While the Yankees are likely to repurchase YES Network, that still leaves 21 RSNs and a lot of regional sports broadcast rights for taking. Sure, it’s possible that FAANG will pursue exclusive broadcast rights, I would bet on an established linear player making a play to acquire the 5th most important channel on a subscriber’s cable package. CBS (think: CBS Sports HQ), Turner Sports (T, B/R Live) and Discovery Communications (DISCA, which has made a significant push for rights in Europe) are all possible landing spots.