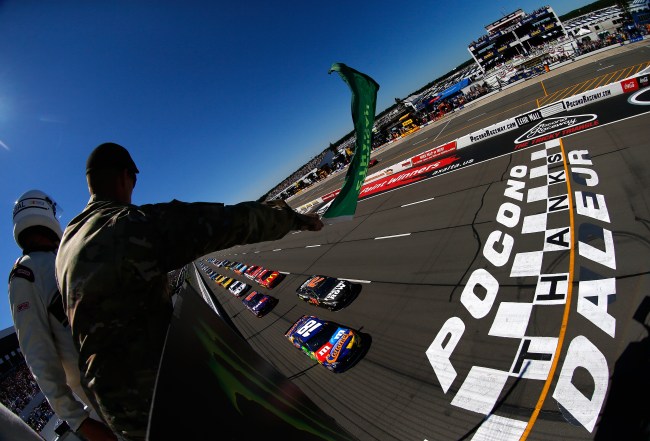 JohnWallStreet is headed to Long Pond, PA this weekend for the Pocono 400 at the “Tricky Triangle”. The race is on Sunday, but Pocono Raceway is hosting a series of events throughout the weekend that NASCAR fans in the Northeast will want to be aware of. Monster Energy kicks things off today with “Free Can Friday”, a promotion offering fans who bring an empty of Monster Energy (MNST) drink (to recycle) free access to the day’s activities. These include a BMX trick show and the General Tire #AnywhereIsPossible 200 (ARCA Series race). On Saturday, the track hosts an Alex Bowman selfie session and the Pocono Green 250 Recycled by J.P. Mascaro & Sons (Xfinity Series race), before the Cup Series takes over on Sunday. That race starts at 2pm, but make sure to get there early; Clint Bowyar (10:45a), Jimmie Johnson (11:00a) and Kurt Busch (11:15a) are all doing Q&As at the Tricky Triangle Club (opens at 8a).

Howie Long-Short: Pocono Raceway, which has been family-owned since its inception in 1971, is one of just two NASCAR tracks (out of 25) that is privately-owned; Indianapolis Motor Speedway is the other. International Speedway Corporation (ISCA) and Speedway Motorsports (TRK) own a combined 22 tracks (13 and 9, respectively), while Dover Motorsports (DVD) owns the “Monster Mile”.

In early April, ISCA reported “revenue and earnings increased for comparable events” in Q1 ’18, despite a continued decline at the gate (admissions revenue -2.5% YoY). Shares are down 11.5% (to $41.70) since February 1.

In late April, TRK reported that a YoY decline in admissions revenue for Q1 events led to a -2.5% decline in total revenue (to $74.4 million). Shares have declined 6% since (to $16.70) despite the company touting the prospects of long-term future profitability from Q3 event realignment.

DVD didn’t hold any events in Q1 ’18, so there was little to report during its most recent earnings statement. The stock is currently trading at $2.10 – exactly where it was 12 months ago.

Fan Marino: For those passionate about their brand of domestic beer, Busch and Busch Light (BUD) are set to go head-to-head on the track Sunday. Kevin Harvick will be driving his #4 Busch Beer Ford Fusion for Stewart-Haas Racing, as he seeks his circuit leading sixth win of the season. Harvick’s SHR teammate and friend Clint Bowyar, winner of the ’18 STP 500 at Martinsville, will be behind the wheel of the #14 Busch Light Ford Fusion. They’ll compete with the loser “scheduled” (weather pending) to cut the infield grass at Pocono. Off the track, the two will battle it out throughout the weekend on social media and will appear on stage together on Friday at Pocono’s Infield Block Party.

Fun Fact: Pocono is referred to as the “Tricky Triangle” because of its bizarre shape with just three turns. In fact, it’s the only track on the NASCAR circuit (road courses not included) that is not oval shaped. That explains the popular “What Turn 4?” saying you’ll see on the track wall Sunday.

Niche college sports, particularly non-varsity club sports, have historically fallen out of the purview of athletics sports rights holders and into a gray area of content replete with official logos and representation, but lacking mainstream coverage. That trend will end this weekend as the fastest growing sport in the country makes its way to ESPN linear and ESPN digital platforms for the first time; College Rugby Sevens. Army, Navy, Air Force and Notre Dame will headline The Penn Mutual CRC field, as 24 teams compete for a National Championship. 30,000 people are expected to attend the two-day event at Talen Energy Stadium (Philadelphia).

Howie Long-Short: Disney (DIS) reported fiscal Q2 ’18 profits increased 23% YoY (to $2.94 billion), with Black Panther ($1.3 billion in box office sales) and theme parks (+13% to $4.88 billion) spearheading revenue growth (+9% to $14.5 billion). Operating income for the company’s cable networks businesses (including ESPN) declined 4% YoY to $1.73 billion. Brook Barnes at the NYT attributed the decline to “higher costs – notably spending on unprofitable streaming services like ESPN+ and hulu – and subscriber declines at ESPN.” ESPN would not disclose the number of subscribers who have signed up for the ESPN+ service, but CEO Bob Iger said “a number of people have signed up for the trial and our conversion rates have been good so far”; adding “basically, I give it a so far, so good.”

21st Century Fox Shareholders (FOXA) have scheduled a date (July 10) to vote on the proposed $52.4 billion asset sale (including regional sports networks) to The Walt Disney Corporation (DIS). Comcast, which said it was preparing a cash offer (as opposed to DIS’ all-stock offer) for the FOXA film studios/cable networks/entertainment businesses, has +/- 6 weeks remaining to submit the bid. Should DIS lose out on the RSNs that are expected to boost the ESPN+ offering, Bob Iger won’t panic; he says the platform is “not reliant at all on the assets”. That’s true right now, as all the local MLB, NBA and NHL broadcast rights are tied up under contract; but, as those deals begin to expire, DIS will want to add the 5,500 games they currently carry to ESPN+. As I’ve previously explained, when a fan in St. Louis can get all the Cardinals and Blues games for $4.99/mo., they’ll subscribe to ESPN+.

Fan Marino: The Pac-12 has dominated the collegiate rugby landscape over the last eight years. The conference has won six of the last eight CRC Championships, with California winning the last five years (Utah won in ’10). This year, Arizona and UCLA are among the tournament’s favorites. Bill Walton would like to remind you that it is, in fact, the “Conference of Champions”.