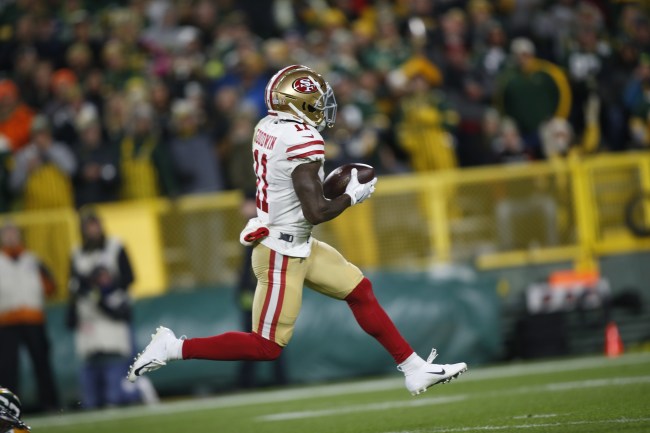 We might have another Fyre Festival situation on our hands.

Last Saturday several NFL players participated in a 40-yard dash tournament that was supposed to pay out over a million dollars in prizes.

Niners Marquise Goodwin was the winner of the event and promised $1 million for his victory.

Unfortunately, it’s been nearly a week since the event took place and several agents are starting to get concerned that the entire event was a sham because no one has gotten paid yet.

At least some participants in last Saturday’s 40 Yards of Gold sprint competition still haven’t received payments despite promises from organizers that cash would come Friday, according to two player reps. NFL agent Will Sarubbi, who represents Vikings WR Jeff Badet, said his client has not received $25,000 he was promised as an appearance fee. Badet lost his first-round race and did not qualify for prizes.
“The contract was explicitly clear,” Sarubbi said. “Jeff was an independent contractor who was promised $25,000 upon arrival, before the event on June 29. That has not been paid as of 5:00pm today. It does not look likely it will be, based on the correspondence we have had.”

Co-founder of the event Charles Stewart said all players will be paid but didn’t explain why there was a delay in payment and where the money was coming from.

In a text message on Friday, 40 Yards of Gold co-Founder Charles Stewart said: “Every participant will be paid.” He declined to provide an explanation for the delays or give assurances about when money would be coming. After the races, players were given checks, but were told they could not cash them until Friday, according to Sean Lindsey, a Ft. Lauderdale-based lawyer who represents a participant he declined to identify. However, both Lindsay and Sarubbi noted event organizers on Thursday told players to scrap the checks, and instead provide bank information to facilitate a wire transfer. The wire transfers didn’t happen on Friday, Lindsey and Sarubbi said.

A week’s delay for prize money is not, by itself, cause for suspicion, Lindsey said. But the practice of giving them worthless checks and changing stories has players concerned.

Hopefully, players get paid because the event was pretty cool but as of now it’s not looking good.