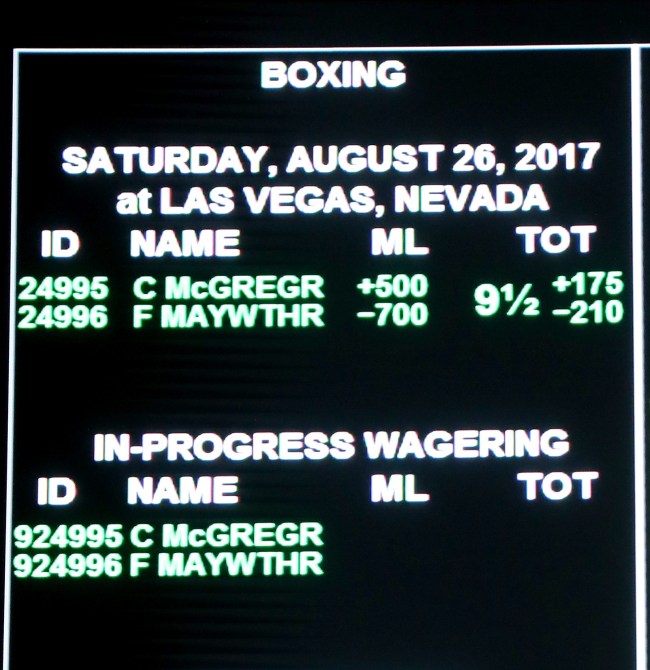 Governor Phil Murphy signed legislation that will allow New Jersey’s 9 casinos and 3 racetracks to take wagers on individual sporting events beginning this Thursday. Gamblers 21 and over will be able to place wagers on a variety of professional and college sporting events, though betting on games involving local college teams (think: Seton Hall, Rutgers) and college games played within the state is prohibited. Initially, wagers will have to be placed in person; though, mobile betting is covered by the bill and will commence in the future (requires licensees to wait 30 days). The William Hill (WIMHY) sportsbook at Monmouth Park Racetrack will begin taking bets at 10:30a on Thursday, just in time for the start of the World Cup later that afternoon. New Jersey becomes just the third state to offer legalized sports betting, following Nevada and Delaware.

Howie Long-Short: Another one of New Jersey’s racetracks, the Meadowlands Racetrack, has found a sports betting partner in Betfair U.S. (subsidiary of Paddy Power Betfair, PDYPY). PDYPY revealed it has signed “long-term agreements for retail and online/mobile sports betting” with the North Jersey track (and Tioga Downs in New York); they plan to begin taking bets later this summer. The news comes just two weeks after the company announced it would be acquiring FanDuel, with the intention of converting their 1.3 million DFS players into true sports bettors. It’s expected that Betfair will brand their U.S. sportsbooks as FanDuel sportsbooks. PDYPY shares are up 11% (to $58.35) since word of the deal first broke on May 15th.

Fan Marino: Monmouth Park officials aren’t satisfied with SCOTUS’ decision to overturn PASPA, they’re now pursuing remuneration for damages caused by the pro sports leagues and the NCAA. The New Jersey Thoroughbred Horsemen’s Association (leases Monmouth Park) claims “the leagues acted in bad faith” fighting them in court, while simultaneously profiting from DFS and authorizing the relocation of several franchises to Las Vegas (nullifying the integrity argument). They’re pursuing +/- $150 million in “revenues we would have had” (from sports betting), between the period of October 2014 – June 2018, had the leagues not opposed their efforts. It must be noted that neither Delaware nor New Jersey included an integrity fee for the leagues in their sports betting legislation.

Wenn Digital and Oak View Group have partnered to bring the Image (and video) Rights Management Platform KODAKOne and its associated cryptocurrency KODAKCOIN to six U.S. sporting venues. Built on blockchain technology, the to-be launched KODAKOne platform will enable fans (+ professional photographers, teams and venues) attending games at those venues to “upload, register and share their work, as well as be compensated for it.” KODAKCoin can be used as a payment for licensing or sale and together Wenn Digital and the six Oak View Group venues will work to build a platform that facilitates in-venue cryptocurrency transactions.

Howie Long-Short: Protecting live event photography rights is a real problem. Photographers have long struggled to prove ownership of their work, have experienced copyright violations and have had difficulties collecting royalties, so KODAKOne looks to be a practical application of blockchain technology within the sports world.

Wenn Digital, which operates the KODAKOne platform and KODAKCoin cryptocurrency, licensed the KODAK brand name for the digital rights management platform and associated token. It’s been reported that KODAK will receive up to $5 million (including $750,000 in cash and $1.5 million in Wenn Digital common stock) for use of their name. On May 21st, having already closed on $10 million in pre-sale investment capital, Wenn Digital launched a Simple Agreement for Future Tokens (due to securities laws) to raise the balance of a $50 million round. As for KODAK (KODK), when the company announced it was pivoting to blockchain back in January, shares rose 272% (peaking at $11.55); though the initial excitement has since been replaced with doubt, shares are up +68% YTD ($5.20).

Back in March, private equity firm Silver Lake Partners invested $100 million in Oak View Group, the entertainment and sports facilities company founded by Irving Azoff/Tim Leiweke. Currently 27 stadiums and arenas use Oak View Group for booking, sponsorship or security services; though Leiweke envisions adding 6-8 more before the end of 2018 (so, there’s plenty of room for KODAKOne to grow with the company). The company acknowledges it’s “going through a massive growth spurt”, but insists it’s with good reason; the NFL, NBA and NHL are “at their healthiest levels ever” and concerts have become increasingly profitable. You can play KODAKOne through Madison Square Garden Company (MSG). Azoff MSG entertainment, a joint venture between Irving Azoff’s management firm and MSG, has invested in Oak View Group.

In other in-stadium news, the NBA has partnered with 15 Seconds of Fame (15SOF) to bring fans in all 29 NBA cities video of their videoboard/live TV appearances while at games. Using facial recognition software, the application identifies the fan and sends them video of the moment. 15SOF is a great idea, but the execution has been terrible. Fans don’t care about the content of the video (waving, dancing etc.), they want video showing their appearance on the jumbotron. In other words, 15SOF should be sending fans wide angle video that reflects the stadium’s atmosphere at that moment, as opposed to the video they’re currently pulling out of context. Kobe Bryant has invested in 15SOF, but there are no ways for our readers to.