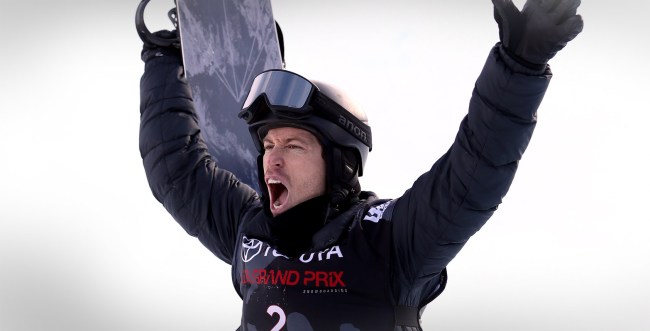 Okay, first of all, Shaun White is still only 32-years-old? Doesn’t it seem like he should be older? Dude’s been around forever. Anyhoo, White is looking to sell his humngous compound on the bluffs of the Pacific Ocean in Malibu, but it won’t come cheap: $27.25 MILLION.

The property is actually two different parcels of land that the 32-year-old White combined into one, but if you’re looking to go halfsies you can snag one of them for just one $14.5 million and the other for $12.75 million.

Each of the parcels in the celeb enclave of Point Dume, just 30 minutes from L.A., have a home fit for a king so unless you really need two beachfront homes (and who doesn’t) buying just one should suffice.

The cheaper of the two homes, which White bought from Dictionary.com founder Brian Kariger for $10.75 million, comes with an open-plan great room which includes a living room and dining area, fireplace, and a spacious ocean-view balcony. It also boasts three bedrooms, two bathrooms, a gourmet kitchen, an enormous family/media/guest room, a covered patio with built-in barbecue, a resort-style pool/spa terrace, and an expansive lawn to the bluff and the ocean.

The more expensive of the pair of houses comes with three bedrooms, four bathrooms, an ocean-view gourmet kitchen, a dining area with fireplace, and an owner’s suite with a luxe spa-like bath, large walk-in closet, and private patio. There are also two family rooms, one with a wet bar, a formal living room with fireplace and walls of glass, a huge fire pit and BBQ, and a wraparound wood deck w/multiple sitting/dining areas.

According to Variety.com, it was also recently leased to Frank Ocean and reportedly occupied by Ocean’s mother, so it’s got that going for it, which is nice.

“The only digits rising faster than White’s medal count are the prices on his SoCal properties. In less than a decade, the price of the compounds has soared by a whopping $7.65 million. We’re just wondering if he’ll invest in a half-pipe outside of the home he invests in next,” said Erik Gunther, Realtor.com celebrity real estate expert.

Check out some pics of White’s compound below and at the two listings on Realtor.com…

@shaunwhite is selling his waterfront Malibu estate for $27.25M. It features two houses and a pool, as well as private access to the beach. #luxuryrealestate #malibu #luxury #lifestyle pic.twitter.com/ifPxPsK6Ky

Shaun White’s Crazy Malibu Compound is Up For Rent At $17,500/Month https://t.co/W1ukYazSlo pic.twitter.com/7hlYeODV11