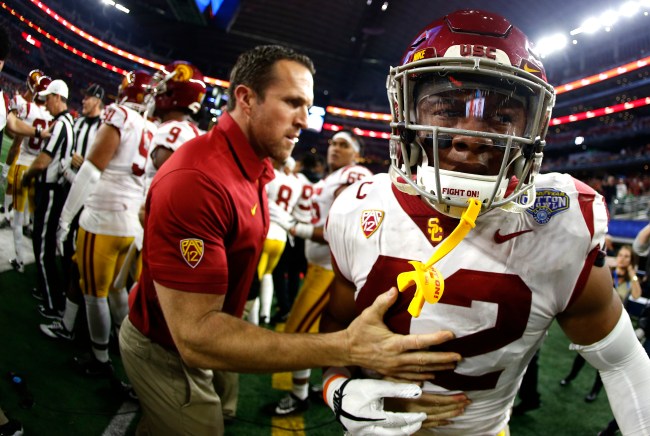 ARLINGTON, TX - DECEMBER 29: Uchenna Nwosu #42 of the USC Trojans looks on after participating in a skirmish in the second half of the 82nd Goodyear Cotton Bowl Classic between USC and Ohio State at AT&T Stadium on December 29, 2017 in Arlington, Texas. Ohio State won 24-7. (Photo by Ron Jenkins/Getty Images)

opendorse has announced the launch of a content distribution platform for collegiate athletes. Designed to help student-athletes build their personal brands, the software empowers these individuals to share content (think: highlights, images from games, team graphics) from their school, to their personal social media channels, with a single tap of the application. UCF, Auburn and TCU were among the schools that participated in a fall 2017 beta program that produced “overwhelmingly positive results”; the more than 400 participants experienced an average increase of 22.9% in total followers during the 6-month trial. More than 20 programs, including schools from all P5 conferences, have committed to (or are already) using opendorse to helping student-athletes tell their story on social media.

Howie Long-Short:  opendorse was founded by former Nebraska Cornhusker football players Blake Lawrence and Adi Kunalic. The Lincoln (NE) based company has maintained its ties to the program, closing on a $3.5 million series A round in November 17, with more than 1/3 of the capital coming from former Huskers; including Bears CB Prince Amukamara. The company has raised $6.3 million to date, but it’s all private money.

Fan Marino: Alex Rios, University of Southern California Football Director of Recruiting, was at the Hashtag Sports conference on Tuesday. I had a chance to connect with him to discuss why college athletes should be focused on building their personal brands and how a platform like opendorse could assist in the recruiting process.

Fan: Why should a college athlete worry about developing their personal brand if they aren’t permitted to be compensated for their name/likeness?

Alex: 3.3 years is the life expectancy of the NFL player. If a player can start developing his brand in college, the opportunities at the NFL level are huge. It is about giving them that jump start to make sure that they are ahead of the pack. The player also has the chance throughout his collegiate career to show that his values and messaging are genuine and authentic; and that’s what all brands want to see.

Fan: How often are prospects asking you about USC’s ability to build their personal brand?

Alex: I doesn’t come up, until I bring it up to them. They’re looking to see what schools offer the best academics, where they can play for a national championship, who has the best alumni network; they don’t understand that what they’re doing right now on social media could impact them for the rest of their lives. I tell them, you’re in the 2nd biggest media market and you have the opportunity to tell the entire world your story; and with the help of a big brand like USC, it could potentially boost their draft stock.

Fan: If you could promise a prospect that they would increase their social following by at least 20%, would that help you in the recruiting process?

Alex: 100%. This is branding athletes. To be able to tell a kid how we’re going to develop them, both on the field and off the field and that their brand is going to be bigger and nationally known (because they came to USC), is extremely helpful.

Editor note: USC is not under contract and has not participated in any trials with opendorse. The parties are currently in discussion.