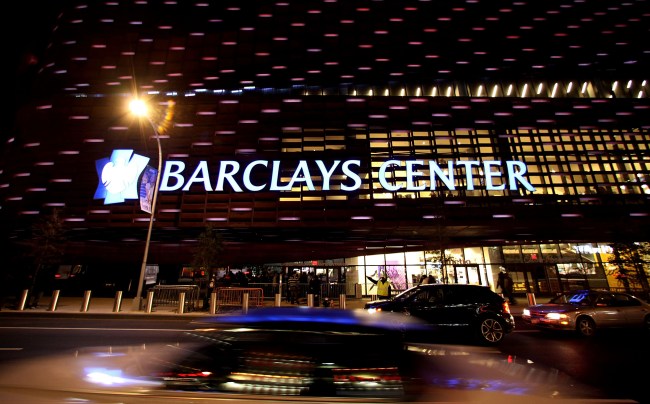 NEW YORK, NY - NOVEMBER 03: A general view of the exterior of the Barclays Center prior to a game between the Brooklyn Nets and Toronto Raptors on November 3, 2012 in the Brooklyn borough of New York City. NOTE TO USER: User expressly acknowledges and agrees that, by downloading and/or using this photograph, user is consenting to the terms and conditions of the Getty Images License Agreement. (Photo by Alex Trautwig/Getty Images)

The Overwatch League (OWL) Grand Finals, set for July 27th and 28th at Barclays Center, is sold out; the esports competition will determine the city-based league’s first World Champion. More than 20,000 fans are scheduled to attend the event. The two teams that reach next weekend’s Grand Finals will compete for a share of a $1.4 million prize pool, in addition to the Overwatch League trophy. League Commissioner Nate Nanzer was surprised by the interest, saying “we knew the Overwatch League had amazing, enthusiastic fans, but this is something else.” Tickets are reportedly now selling for upwards of a 300% premium on the resale market.

Howie Long-Short: Blizzard Entertainment put Grand Finals tickets up for sale on May 18th and announced the event was sold out just 2 weeks later (June 1st). While an impressive feat for a league in its first season, fan interest lags far behind that of League of Legends (LoL) and Dota 2. Those titles regularly sell-out marquee events within minutes. In fact, LoL sold over 80,000 seats to its ’17 World Championships within a minute. Selling out Barclays Center allows OWL to finish Year 1 on a high note after watching viewership steadily over the 2nd half of the season, from over 350,000 viewers in Week 1 to +/- 200,000 total viewers for the Quarterfinals.

Blizzard Entertainment (ATVI) is the publisher behind Overwatch and the OWL is their most ambitious esports endeavor. Back on May 3rd, the company reported record Q1 net revenue ($1.97 billion, +14% YoY) and profits that rose 17% YoY (to $500 million); particularly impressive considering they didn’t release any new games during the quarter and Q1 is typically the slowest time of the year as it comes on the heels of holiday season. Any concerns that Fortnite’s popularity would impact OWL profits have yet to be realized. ATVI shares are up 10% (to $80.61) since June 27th, hitting their 52-week high on Friday July 13th ($81.64). The company will report Q2 financials on August 2nd.

Fan Marino: Speaking of viewership, Activision Blizzard (ATVI) has signed a broadcast deal with ESPN to televise OWL action (Season 1 playoffs through Season 2); immediately becoming the esport’s highest profile broadcast platform (they also have a 2-year $90 million deal with Twitch). The newly signed agreement means that next weekend’s Grand Finals will become the first live gaming competition to air on ESPN, in primetime, and the first time an esports championship to air on ABC. For those wondering, last weekend’s quarterfinals on Disney XD drew +/- 127,000 viewers.

Darrelle Revis retired on Wednesday, marking the end an illustrious 11-year career. The last of the shutdown cornerbacks, Revis earned over $124 million in his career; the most of any player in his draft class (included: Adrian Peterson, Calvin Johnson and Joe Thomas). It was Revis’ unconventional approach to the business side of the game that enabled him to earn money typically reserved for franchise quarterbacks, consistently foregoing secure but less lucrative long-term deals for the largest possible short-term pay day. The strategy worked. Revis retired as the 2nd highest paid defensive player in NFL history (behind Julius Peppers, tied with Suh)

Howie Long-Short: Any conversation about Revis and contracts must start with his uncle and advisor, Sean Gilbert. The Washington Redskins named Gilbert their franchise player following the ’96 season. Gilbert passed on signing the one-year $3.4 million offer, before ultimately sitting out the season. The following summer Washington offered a one-year deal worth $2.97 million (avg. of 5 highest paid players at DE). Again, Gilbert wouldn’t sign a contract; God had told him in a dream not to take less than $5 million. This time though, he argued to the league office that the franchise didn’t have the right to place the franchise tag on him for a 2nd year in a row. Following a meeting between the NFL and NFLPA, Gilbert landed in Carolina (in exchange for 2 1st round picks), signing a massive deal worth $46.5 million. While Revis is often credited as the league’s “savviest negotiator”, remember Sean Gilbert was the brains behind the operation.

Fan Marino: Darrelle Revis is going be inducted into the Hall of Fame, the only question is if he’ll get in on the 1st ballot. Detractors will tell you Revis was only GREAT for 4 seasons, but no one questions Gale Sayers’ worthiness and the Kansas Comet only played in 9 games 5x; greatness is simply valued over longevity.

Those arguing on Revis’ behalf will point to 2009, the single greatest season a cornerback has ever had (Pro Football Focus has confirmed this since ’06). In a pass-friendly league, playing man-to-man coverage, Revis never gave up more than 5 catches or 58 yards in 16 regular-season games; while leading the Jets to the AFC Championship game. Revis’ impact can best be measured by the reception, yardage and TD totals of the league’s best receivers when matched up against him.

I’m looking forward to visiting Canton and watching Darrelle’s enshrinement ceremony in the Summer of ’23. Thanks for the memories #24!