Patrick Ewing Is Renting Out His 10,524-Square-Foot Mansion For $25K A Month – Take A Look Inside 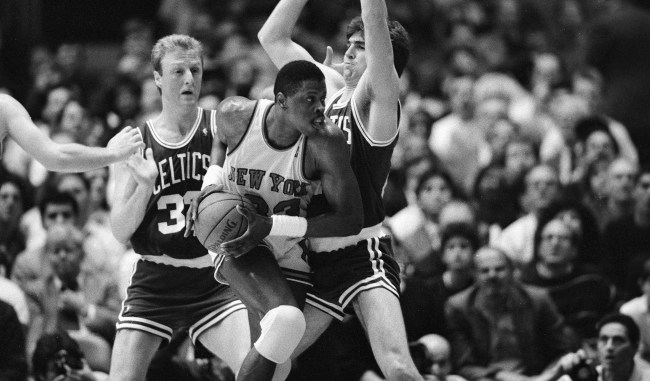 Usually when we share a look at some of the most insane celebrity homes it is because they are on sale (often marked down considerably). Today, however, we get to take a peek inside a celebrity home that you can actually rent… assuming you’re loaded to the gills with cash money.

This isn’t just some regular celebrity home either. This home, located in Cresskill, New Jersey, is owned by one of the 50 Greatest Players in NBA History and a two-time inductee into the Basketball Hall of Fame, Patrick Ewing.

The property was purchased by Ewing back in 2007 for $6.35 million and his since undergone some incredible renovations.

Which is why Ewing is now looking to rent the property to anyone with $25,000 a month to spare.

The two-story family room has floor-to-ceiling windows, a double-sided fireplace, and an interior balcony.

The chef’s kitchen is equipped with stainless-steel appliances, an island with bar seating, and a breakfast area with a fireplace.

The main floor also includes a formal dining area and an office with built-in shelves.

You can take the elevator or stairs to the second floor, where you’ll find the master suite with a fireplace, and four more bedrooms with private baths.

On the lower level, the home offers a wet bar, recreation room, media room, gym, and bedroom with bath. From this level you can walk out to the basketball court.

It also comes with a lagoon-shaped pool and spa, and a four-car garage.

So if you are interested in renting rather than buying, and have $300,000 to spend on a rental for the next year, we may have just found the perfect place for you.

174 Vaccaro Dr, Cresskill, NJ
1.8 acres of stylist!
This is a classic, stunning and gorgeous place from the base to the top.
French doors, fireplaces, gourmet kitchen, spa, basketaball court. All you need in one place!#ColdwellBanker #CBHomes #FortLee #HomeSweetHome pic.twitter.com/6AuORgRwgL

This home has the perfect home office among other luxuries. Ask us about it!
174 Vaccaro Dr, Cresskill, New Jersey #RealState #KolslyTeam pic.twitter.com/4CDfnrqUSb