Why Does Pay-For-Play Work for Basketball, But Not Soccer? 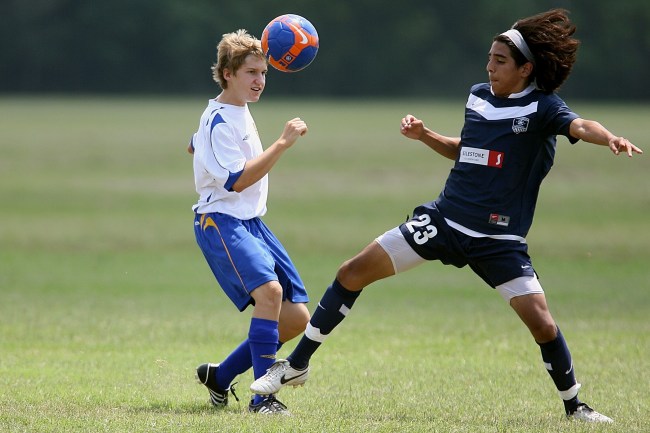 Why Does Pay-For-Play Work for Basketball, But Not Soccer?

A study by the Sports & Fitness Industry Association (SFIA) indicated that participation in youth soccer is rapidly declining in the United States. According to SFIA, which has been analyzing trends in youth sports for the last 4 decades, the percentage of 6 to 12-year-olds playing regularly has declined -14% (to 2.3 million) over the last 3 years; with the sport losing 600,000 child participants during that time. U.S. Soccer Federation participation (i.e. number of registered players, coaches, referees) figures do not mirror the regression found by SFIA, but the organization does acknowledge participation has plateaued after rapid growth in the late 90s, early 00s.

Howie Long-Short: Hope Solo recently attributed the waning participation figures to the proliferation of pay-for-play clubs/leagues. There’s no doubt that club/travel teams discourage participation, but youth basketball thrives under the AAU system and the sport has seen a recent uptick in involvement; so, there must be other factors at hand.

One issue would seem to stem from the size of the commitments made by the corporate sponsors. While footwear/apparel brands (see: Nike, Adidas, Under Armour) heavily subsidize the costs of AAU basketball, there are no shoe sponsored leagues (think: Nike EYBL) or tournaments (think: Nike’s Peach Jam Classic) for youth soccer players. While I can’t speak to Adidas or Under Armour’s participation, Nike’s involvement in youth soccer is limited to annual investments in the U.S. Soccer Federation scholarship fund and sponsorships at the club level. The shortfall leaves the U.S. Soccer Federation heavily reliant on donations to grow youth participation.

The way the U.S. Soccer Federation is structured, as a collection of members as opposed to a top-down single entity, also hampers the organization’s ability to reduce the cost of participation wholesale. As Chief Soccer Officer Ryan Mooney told us, “the organization is so far removed from the business model that dictates the actual endpoint of participation and the price point, it’s hard to say with a million dollars, $5 million or $10 million about how you would effectively utilize it.” So, even if a sponsor wanted to reduce the cost of participation of every kid, U.S. Soccer lacks the authority to ensure consistent fees across clubs/leagues.

Did you know? At least 35% of those currently participating in youth soccer are coming from households where the average income exceeds $100,000/year. Just 11% come from households earning less than $25,000/annually.

Fan Marino: While U.S. Soccer won’t be able to do much to reduce costs wholesale, the organization is making a concerted effort to grow the game. One key initiative is to increase the number of licensed coaches to over 300,000 by end of 2022. The organization “believes very strongly that if we can improve the quality of coaching for kids 12 and under, we can naturally retain and grow participation.” To that end, U.S. Soccer has revamped its coaching licenses at the grassroots level and has built a digital platform to push new educational programming.

It should be noted that the rapid rise of eSports and the early specialization of sport (which leads to high burnout rates) are also contributing to a decline in youth sports participation.

If you’ve ever watched Monday Night Football, you’re familiar with this song. Interestingly, ABC/ESPN does not own the ballad entitled “Heavy Action”; it’s a pre-composed British library track that was pulled off a shelf at ABC 30 years ago. That track is among 620,000 others in the APM Music Catalog. JohnWallStreet had a chance to connect with Matt Gutknecht, Sr. Account Director, Sports Entertainment at APM Sports to explore the intersection of sports and the music business.

JWS: Why would a pro sports franchise choose to work with APM Sports as opposed to just playing “Top 20” hits?

Matt: Teams come to use for 2 reasons. You may have seen on national signing day a bunch of Top 25 college football programs had their Twitter accounts shut down for copyright infringement (use of popular music). So, we can provide a solution to mitigate and reduce liability.

The second reason is cost. One NBA team paid $200,000 for the in-arena and social media use of a single pop song (in their scoreboard intro video), for 41 home games. We can provide a track similar in vein, something unique that no one else, without having to pay in the low-to-mid six figures.

JWS: Is there a financial penalty for this type of copyright infringement?

Matt: No, I’ve actually had P5 conference teams tell me they’d rather pay a fine than have the content (or their account) taken down.

JWS: A team wants to use The White Stripes’ Seven Nation Army but isn’t willing to pay the publisher’s asking price. What kind of solution can you offer them?

Matt: So, we’d look to create a great track, with big quarter note, bass drum feel. That coral, chanting kind of thing. We’re not in the business of knocking off tracks or doing something that is 2-3 notes away. (check out a sample playlist in the style of The White Stripes)

Fan Marino: Speaking of Imagine Dragons, “the new White Stripes for in-arena music”, if you’re a college football fan, you’ll be hearing a lot of them this fall. Their hit “Natural” has been selected by ESPN/ABC as their 2018 college football anthem. You may recall, the ’17 anthem was “Walk on Water” by 30 Seconds to Mars.