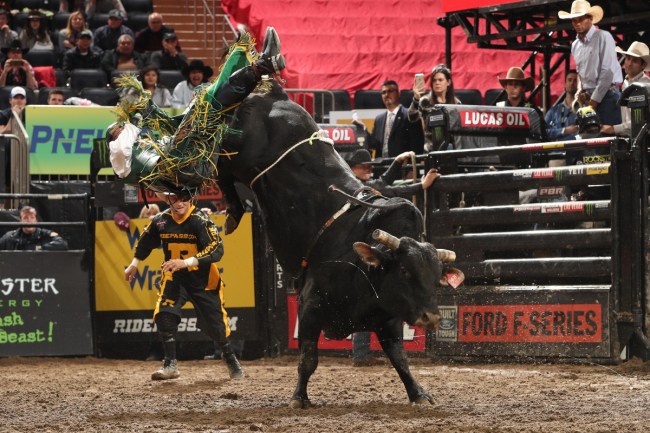 Professional Bull Riders (PBR) kicked off its 26th season with the Unleash the Beast Monster Energy Buck Off at Madison Square Garden last weekend. 2017 World Champion (and the current the #1 ranked rider) Jess Lockwood won PBR NYC with a perfect weekend (4 rides), earning $118,350 in the process. Sean Gleason is the CEO of PBR, one of America’s fastest growing sports properties, and JohnWallStreet sat down with PBR executive to learn how the business has evolved since the Endeavor acquisition in ’15, to understand why the organization has begun pursuing non-endemic sponsors (see: Monster Energy) and to find out how the company’s television deal with CBS aligns with Endeavor CEO Ari Emanuel’s DTC strategy?

Sean: We do about 40% of our revenue in ticket sales, 40% in sponsorship and the remaining 20% in media rights and other sources.

JWS: This is your 20th season with PBR. How has the business has evolved since the Endeavor acquisition ($100 million) in 2015?

Sean: The Endeavor years – the last three years – have been the best of my career. PBR has had virtually unlimited access to all their resources. One asset that we have access to is the Endeavor Global Insights Group, which is one of the world’s foremost research and analytical groups; having access to that type of data – which gives us the opportunity to better understand our customer – has been a huge lift for our overall business.

Endeavor’s history as a content developer has also helped us to secure projects like Fearless (on Netflix) and some other shoulder programming that continually grows the brand and our sport; their insights on how to place that content has also been immeasurable.

JWS: Historically speaking, PBR has focused on endemic sponsors, but there’s been a shift to non-endemic sponsors of late. What demographic are you looking to reach with those new partnerships?

Sean: PBR sponsorships have always been a little more endemic to western lifestyle with companies like Ford Motor Company, Wrangler jeans and Stanley hand tools participating, but last year Monster Energy took the title position for the first time (previously was Ford) and I think that change is indicative of our shift towards the extreme sports audience; a younger demographic that we’ve seen growing over the years. We’re excited about the opportunity to work with Monster because it is a hip brand with a wider audience.

JWS: Teams and leagues across the sports world are focused on offering an “entertainment experience” beyond the game, but that’s not a new concept to PBR. What does the organization do to ensure attendees have a good time, even if they’re not interested in bull riding?

Sean: We take an exciting, fast paced, adrenaline packed sport and wrap it in world class production. We pack our own lights, our own sound systems and our own pyrotechnics. We bring in our own entertainer (think: rodeo clown) and the music plays a huge part of it; it’s what has allowed us to introduce bull riding to tens of millions of people that had never been exposed to it (or the rodeo) before. Look at Madison Square Garden, there hadn’t been a rodeo in New York City since the 1950’s or 60’s (before PBR 12 years ago). We do 3 days there in front of a virtually sold out crowd mainly because it’s a great night out. I like to say, we hook them with the spectacle and then we keep them with the sport.

JWS: Gamblers who wish to bet on bull riding are currently limited to the World Finals in Las Vegas. Do you anticipate that widespread legalized sports gambling would be of benefit to PBR?

Sean: Yeah, we think it would resonate well not just with our core fans, but with gamblers. It’s an exceptional sport for gamblers because you can bet 45-50x in a night (every 1-2 minutes) and you don’t necessarily have to be interested in bull riding. There are a lot of ways that you can place bets; everything from the 8-second threshold for a ride (i.e. does the rider stay on or not), to the scores and the competition between riders (and the bulls, which also receive scores for each ride) over the course of a night or a weekend.

Howie Long-Short: “Direct to consumer” is a key part of Endeavor CEO Ari Emanuel’s strategy to make the former talent agency a true transformative 21st century media company. You may recall that back in ’18 the company acquired NeuLion for $250 million, giving it a platform to distribute DTC content. I asked Sean if PBR’s OTT offering (RidePass OTT) had become more profitable than their linear television package (terms not disclosed)?

Sean: The package we have with CBS is the cornerstone of our business, so it has not happened yet and it’s going to be a lot of years before – if ever – that the digital approach becomes more important to our media strategy than linear television.

Fan Marino: On Friday, PBR announced a distribution agreement with FloSports that will bring RidePass OTT (and its western sports content) to the live digital niche multi-sport programmer. The deal should help PBR grow its fan base, but also has monetary upside; the organization will receive a per subscriber fee and additional compensation based on content consumption. It’s not the first time that Endeavor has aligned with FloSports; the OTT provider also distributes the company’s EuroLeague, RallyCross and FIVB (Fédération Internationale de Volleyball) content.

Fun Fact: The bulls featured in PBR events are worth $200,000 – $500,000, but they’re not owned by the organization; they’re hand selected and leased from independent stock contractors to avoid any potential conflicts of interest (think: not putting out the best field of bulls). PBR pays +/- $1,000 to the contractor every time the bull is bucked out.