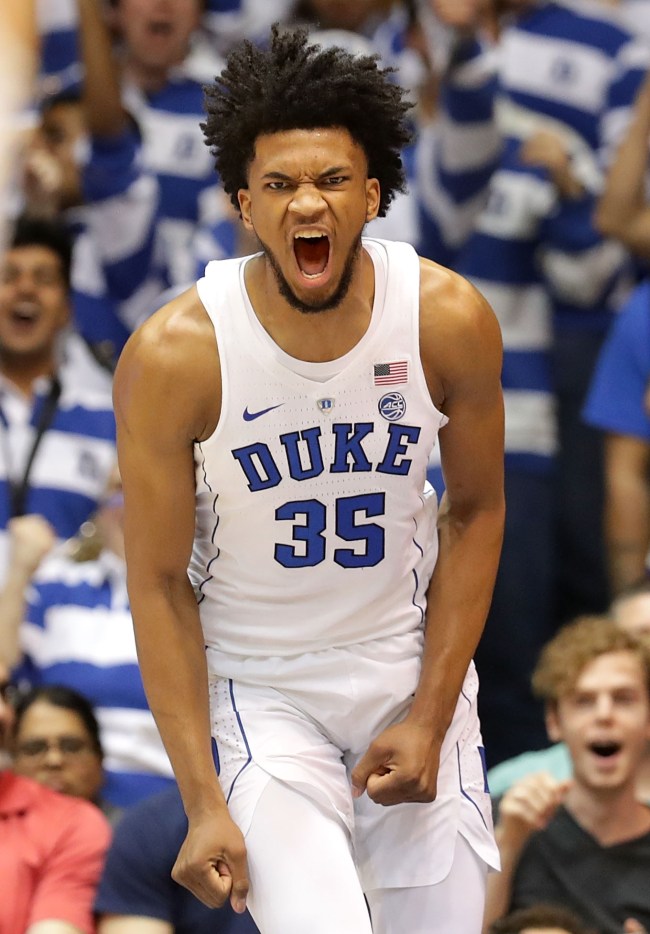 DURHAM, NC - FEBRUARY 24: Marvin Bagley III #35 of the Duke Blue Devils reacts after a play against the Syracuse Orange during their game at Cameron Indoor Stadium on February 24, 2018 in Durham, North Carolina. (Photo by Streeter Lecka/Getty Images)

Marvin Bagley III has signed a 5-year footwear and apparel deal with Puma, rumored to be worth up to $9 million annually, the largest rookie shoe deal since Kevin Durant signed a 7-year $60 million deal with Nike in 2007. Bagley, projected to be a Top 5 selection in Thursday evening’s NBA draft, will become the first NBA player to be sponsored by Puma since Vince Carter signed a 10-year $50 million deal with the company back in 1998; Carter terminated the deal in his Sophomore season to sign with Nike. Puma is negotiating with several other rookies (Trae Young has been mentioned) in the 2018 draft class and will reportedly target veterans with expiring shoe contracts later this fall, as the company looks to re-enter the lucrative U.S. performance basketball shoe market (down 13% from $1.3 billion peak in ’15).

Howie Long-Short: Puma is coming on strong and now taking aim at the U.S. market; in addition to their aggressive basketball ambitions (Nike controls 81.3% of the market including Jordan brand), the company announced it has signed a lease for 24,000 SF on 5th avenue for a North American flagship store. Puma has surpassed Under Armour and is now third in sales among athletic apparel brands, behind just Nike and Adidas.

Puma SE, a subsidiary of Kering, trades over-the-counter under the symbol PMMAF. The German athletic footwear and apparel brand reported net profit rose +36% YoY (to $82.5 million) in Q1 ’18, with sales increasing double-digits across all product categories and markets (+15.6% in U.S.). China/Asia experienced “exceptionally high growth” (+35%), while the running, training and sportstyle categories grew the fastest. PMMAF also increased FY18 sales (from +10% to +10%-12%) and EBIT (from $354-$377 million to $360-$383 million) guidance during the April earnings call.

Fan Marino: Nike won’t be pleased with this decision, considering they’ve been paying for Bagley’s allegiance since 2012. In 2008, the Bagleys filed for Chapter 7 bankruptcy, claiming household income of $44,000. Four years later, shortly after Nike sponsored the Phoenix Phamily (the team Bagley III played on, coached by Marvin Jr.), the family moved into a California home estimated to be worth between $750,000-$1.5 million; rent in the area ranges from $2,500-$7,500/mo. The elder Bagley has acknowledged the family used Nike money to “make ends meet.”

That kind of arrangement isn’t atypical, The Oregonian released a piece back in March detailing how sneaker companies skirt NCAA regulations by targeting the family members of star prospects who control their own AAU programs; offering a “blank check” for their allegiance. What is unusual, is Bagley took Nike money and then signed with Puma; analysis of 2017 NBA first round picks indicates that most players signed professional shoe deals with the company that sponsored their grassroots team. It’s worth noting that Bagley’s deal with Puma includes a commitment from the brand to continue funding his father’s AAU program.

DraftKings is raising a $150-$200 million funding round to complete its pivot from a DFS company to a legalized sports betting business (with web-based and mobile offerings). Earlier this month, the company announced it had partnered with Resorts Atlantic City (land-based casino partner required) and formally applied for a New Jersey State Gaming License, so that it could take sports bets within the state. No information pertaining to valuation has been disclosed.

Howie Long-Short: DraftKings is reportedly telling investors that it’s expecting DFS to continue driving corporate profits for “years to come” as nationwide legalization will be a slow process. I give the company points for honesty, but that’s not news that will excite me as a prospective investor. The company lost $92 million on $160 million in revenue in ’16, so it’s reasonable to assume it wasn’t profitable in ’17 on $192 million; and with DFS set to begin losing market share to legalized sports betting (see: Yahoo! DFS, FanDuel in Europe) one can’t assume 2018 will be any better. The announcement of this round would seem to imply the company currently lacks the runway to complete a pivot that it acknowledges will take time.

Axios has also reported that Platinum Eagle Acquisition Corp. (EAGLU) has expressed interest in a reverse merger; an expedient and cost effective way for a private company to trade on a public exchange. No details have been released relating to the equity percentage at which EAGLU would acquire the company or the valuation DraftKings holds; FanDuel calculated its fully diluted value to be $1.2 billion in 2017, though its user base is smaller (6 million versus 10 million).

The Legal Sports Report has reported that Kindred Group (STO: KIND-SDB) is also kicking the tires on a potential DraftKings acquisition. That news is interesting as KIND-SDB announced back in May intentions to enter the U.S. market and it’s believed that a subsidiary (Kambi Group) is working with DraftKings to develop a mobile sports betting product. The European online gaming and sports betting company, best known for subsidiaries Unibet and 32Red, did just shy of $1 billion in revenue last year.

Fan Marino: Penn National Gaming (PENN) is another company that has an opportunity to get in on New Jersey’s sports betting gold rush. The company, along with Greenwood Racing, owns a proposed OTB site in Cherry Hill that could qualify for a sportsbook under a bylaw that covers “former racetracks”. The joint venture also owns the Freehold Racetrack.