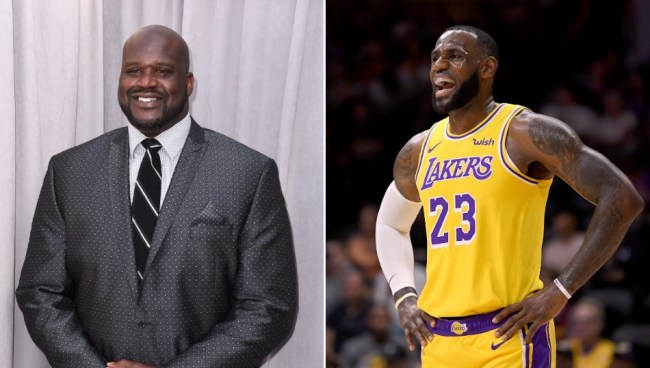 Shaq isn’t a fan of LeBron James’ complaints about the shortened NBA season.

All year long LeBron has been vocal about his displeasure with the league’s cramped schedule. Just a few weeks ago, LeBron took a shot at the NBA and blamed them for the rise in injuries due to not giving players enough rest this year.

They all didn’t wanna listen to me about the start of the season. I knew exactly what would happen. I only wanted to protect the well being of the players which ultimately is the PRODUCT & BENEFIT of OUR GAME! These injuries isn’t just “PART OF THE GAME”. It’s the lack of PURE RIM REST rest before starting back up. 8, possibly 9 ALL-STARS has missed Playoff games(most in league history). This is the best time of the year for our league and fans but missing a ton of our fav players. It’s insane. If there’s one person that know about the body and how it works all year round it’s ME! I speak for the health of all our players and I hate to see this many injuries this time of the year. Sorry fans wish you guys were seeing all your fav guys right now.

During an interview on CNBC on Tuesday, Shaq fired back at LeBron over his comments. Shaq took issue with LeBron complaining while making millions of dollars playing a game for two hours a night in a world where so many people have lost their jobs due to the pandemic.

“I’m not knocking what anybody said, but me personally, I don’t complain and make excuses because real people are working their tail off and all we gotta do is train two hours a day, and then play a game for two hours at night and make a lot of money…So my thought process is a little different.”