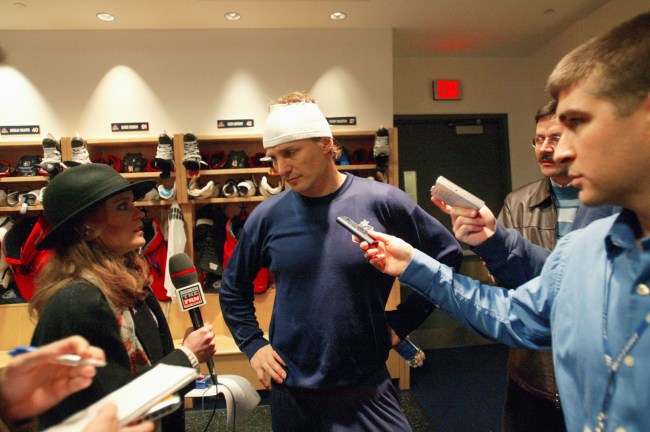 COLUMBUS, OH - OCTOBER 23: The media interview center Sergei Fedorov #91 of the Columbus Blue Jackets prior to the NHL game against the San Jose Sharks on October 23, 2006 at the Nationwide Arena in Columbus, Ohio. (Photo by Bruce Bennett/Getty Images)

TheMaven, Inc. (MVEN), a coalition of independent professional journalists “operating on a shared digital, advertising and distribution platform, unified under a single media brand” has announced it will be partnering with The Sports Xchange (TSX), a sports wire service with a network of professional editors, reporters, writers and analysts, to cover the beat for every professional sports franchise and major college team nationwide. TheMaven CEO James Heckman, who believes sports journalism has been “displaced by teams of digital marketers in New York, who create clickbait memes, silly videos, lists and sophomoric social posts intended to trick users into a profitable reaction”, touts the new venture as the solution to “restoring and supporting professional journalism.” MVEN technology empowers reporters “to own their own sustainable media business”; giving them a digital platform to break news, publish real-time mobile video, generate fan engagement and reach 90 million plus viewers, all at the team level. The new sports network will have coverage for all 32 NFL teams and college football’s biggest programs in time for the start of the 2018 football season.

Howie Long-Short: If you think you’ve seen this business model before, it’s because the founders built Rivals.com (and Scout.com) on it over 20 years ago. The dig referencing “clickbait memes, silly videos, lists and sophomoric social posts” is a veiled shot a Bleacher Report (B/R), but one I find particularly disingenuous considering Rivals is best known for their recruiting rankings (i.e. a list). Heckman went after B/R because B/R is the leader in the “team stream” clubhouse and while it’s true they are active on social (here’s a great post) and publish animated video (see: Game of Zones, which happens to be uber-popular), to insist their content isn’t authentic is simply inaccurate; B/R engagement figures destroy the competition. On June 21st (day of the NBA draft), Bleacher Report had 6 million social engagements. To put that in perspective, Barstool Sports – which constantly touts their engagement numbers – saw +/-2.25 million, ESPN experienced +/- 1.75 million; the NBA was the only other sports related social account with more than 3 million engagements and they did just over 4 million.

I should mention, Bleacher Report isn’t the only outlet operating at the team level. The Athletic has raised $30 million in capital and is hiring beat reporters to cover teams around the country. You know who they’ve been hiring? The same “credentialed, authentic, veteran” newspaper writers that MVEN seeks to bring in – and they’re paying them 15-35% more than they were previously making to join. TheMavin Inc. trades over the counter under the symbol MVEN. Shares are up 5% since news of the partnership broke.

Fan Marino: Speaking of Rivals, the outlet recently released their updated their list of the Top 10 football prospects for the class of 2019 and class of 2020. Derek Stingley, Jr. a CB (1st CB to ever be Rivals #1 prospect) from Baton Rouge, LA is the top recruit in the class of ’19. To no one’s surprise, Stingley is committed to his home town LSU Tigers. The top kid in the class of ’20 is D.J. Uiagalelei, a 6’4 225-pound pro-style QB at St. John Bosco (CA); he has 30 offers on the table thus far, including Alabama, USC and Texas.

BT has signed a carriage agreement with Amazon that will bring sports content from the Prime Video library (along with movies and television shows) to cable television (BT TV). Effective immediately, BT TV subscribers will receive complimentary access to the Amazon Prime Video streaming service, ensuring British soccer fans can to watch every ’19-’20 EPL match via their set-top boxes; Amazon recently acquired the exclusive rights to broadcast 20 matches/season in the U.K. and Ireland, beginning in 2019-2020. Financial terms of the Amazon carriage deal were not disclosed.

Howie Long-Short: It was just 3 weeks ago that the EPL announced Amazon (AMZN) and BT Sport (BT) had won exclusive rights (in U.K. and Ireland) to the last 2 broadcast packages available for 3-year period beginning in ’19-’20; each containing 20 games/season. While terms of the Amazon deal were not disclosed, BT Sport reportedly signed a pact worth $40 million/year. Back in February, the EPL announced BT won package A ($409.3 million/season, for 32 matches/season), while SKYAY took home packages B, C, D & E ($1.655 billion/season, for 132 matches/season). Content sharing agreements with both BT Sport and Sky Sports ensure BT subscribers have access to all EPL games.

Fan Marino: In addition to the EPL, Amazon has exclusive broadcast rights (in U.K. and Ireland) to the U.S. Open Tennis Championships (through ’22) and ATP World Tour. BT subscribers will also receive access to those events at no additional charge.