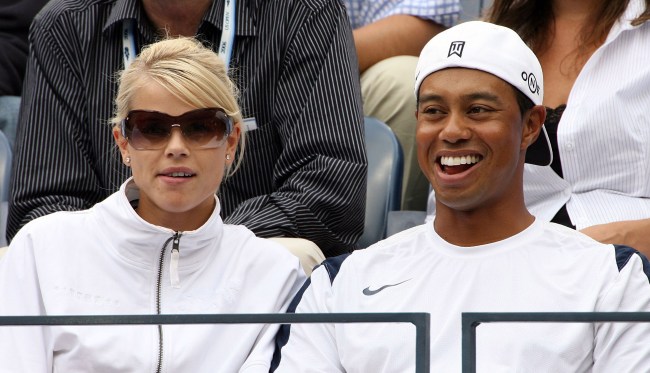 Listen, I am sure that if Elin Nordegren, now 38-years-old, had never met Tiger Woods that she’d be very successful in life at whatever it is that she does. (According to Wikipedia, she is “a Swedish model, and is the ex-wife of professional golfer Tiger Woods.” Two very good gigs if you can get ’em.)

But sometimes in life, and there is no arguing this, it turns out that it’s better to be lucky than good. Because unless Nordegren became the supermodel of the century, instead of marrying Tiger Woods, I highly doubt that her degree in psychology would have led to her currently trying to sell her 25,878-square-foot mansion in Florida right about now. I’m just sayin’. That’s not a dig at her, it’s just like I said, sometimes it’s really good to be lucky.

I mean, this house, which is the home of just one adult and two children (unless she has other relatives and/or friends who live there), has 11 bedrooms and 15 bathrooms!

Check out the description of this place by the Wall Street Journal.

There’s also a cabana house with a bar, a billiards table and a summer kitchen. A separate guesthouse is configured as two apartments, each with its own living room and kitchenette. Amenities include a putting green, a fire pit and a sport court for basketball and pickleball.

The main residence, completed in 2014, has several rooms with retractable walls of glass doors, a roof deck, a wine cellar, a theater, two kitchens and a subterranean gym with an observation window that looks directly into an outdoor swimming pool with a water slide.

Nordegren bought the land for this house back in 2011 for $12,250,000, which by the way, already had a mansion with six bedrooms and eight bathrooms on the property. It apparently wasn’t to her liking so she demolished it to build her current $50 million estate, which was completed in 2014.

If only we could all be so lucky in life. Although paying the $346,289 in taxes that she did last year on the home certainly doesn’t sound very pleasant.

Elin Nordegren (Tiger’s ex) has put her Florida home up for sale for a smidge under $50m. Purchased for just over $12m 🤔 pic.twitter.com/ieYAUYh4rJ