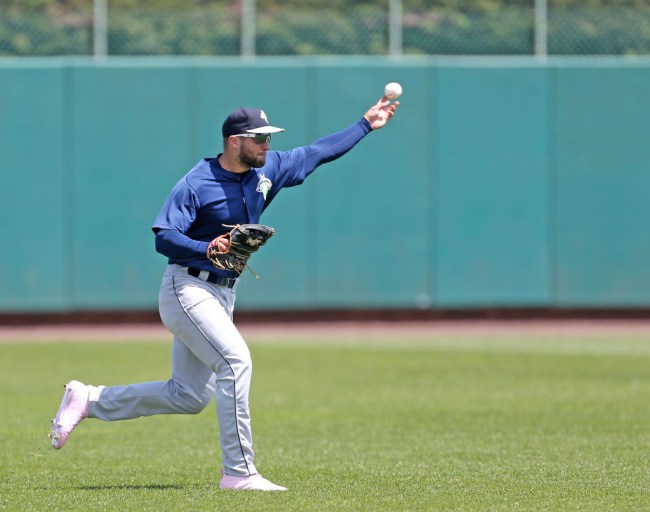 Timmy Tebow is now the main attraction of the Columbia Fireflies, the Class A affiliate of the New York Mets. As of late, he’s having a bit of a resurgence, although currently he’s only batting .227 with two home runs and 11 RBI.

Despite his mediocracy, the Fireflies have seen ttendance rise 30 percent over last year, and Baseball America estimates that road teams in the South Atlantic League will earn an additional $3.1 million based on his presence.

In any event, this post is about a baseball to the baby maker during Tuesday night’s outing against the Lakewood Blue Claws. During pre-game warmups, Tebow threw an errant ball that hit a 45-year-old New Jersey man right in the nads, sending him into the fetal position.

The victim, Doug Brustman, had this to say about the incident.

“They were warming up and throwing in front us, and I wasn’t paying attention,” said Doug Brustman, who brought his 13-year-old daughter to see her idol play.

I hear this guy behind me yell, ‘Watch out,’” said Doug Brustman, the unlucky victim. “And as he’s yelling, the ball comes right through the railing and hits me right in the nuts. It was a direct hit. …

It was literally like a Seinfeld episode. The guy behind me shouts, ‘It was TEBOW.’ It reminded me of his days with the (New York) Jets when he couldn’t complete a pass. This guy is so inaccurate, even with a baseball.”

To make things even more awkward, Brustman attended Tennessee and was wearing a Vols hat at the game.

Since Tebow is technically Jesus, he made everything copacetic again by checking on Brustman to make sure he was doing alright. He ended up signing the ball as well as two books that his daughter had brought to the game.

“He didn’t have to come over. How can you hate him?” Brustman asked. “He’s almost too good to be true.”

“It is really funny, except that it hurts.”

God damnit, I want this guy to not suck at baseball so bad.