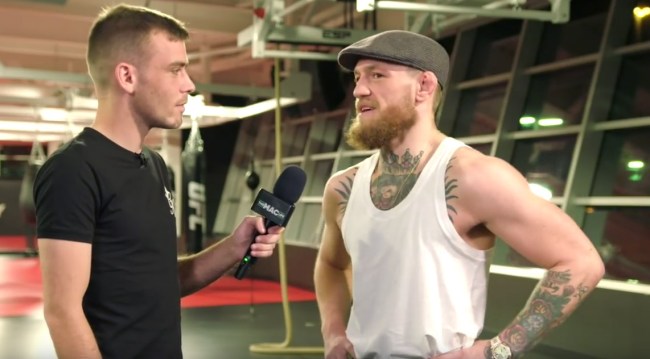 Conor McGregor will fight (Khabib Nurmagomedov) inside of a UFC Octagon on Saturday night (Oct. 6) for the first time since November ’16 (against Eddie Alvarez), setting up the most anticipated fight night in UFC history; the mixed martial arts promotion expects the card to post 3 million plus PPV buys (at $64.99), which would be a company record (more than $195 million in revenue) and the 3rd biggest event in PPV history (behind Mayweather/Pacquiao and Mayweather/McGregor). Current trends reflect UFC 229 will also post highs for both in-arena attendance (20,000) and gate receipts ($17 million) for the promotion within Las Vegas. While McGregor is the massive draw, UFC President Dana White said Nurmagomedov hits “two huge audiences” (Russians and Muslims) that the UFC has not traditionally drawn from; which explains the record projections.

Howie Long-Short: Back in 2010, Flash Entertainment acquired 10% of the UFC for $200 million. The company maintained their minority stake (as did Dana White with his 9%) when Endeavor bought the mixed martial arts promotion from the Fertitta brothers for $4 billion in 2016. White recently said the UFC’s valuation had risen to $7 billion. If true, the Abu Dhabi government owned sports promotion experienced an astounding 250% return on their investment.

The UFC has not disclosed McGregor’s purse for the fight, but it is reported to be the largest in MMA history. According to White, whatever the number is it’s likely to be far less than what he earns from his whiskey brand (see Fan below); projecting “the whiskey thing is probably going to make this kid a billion dollars.”

Fan Marino: While most of the headlines leading up to the fight have focused on McGregor, Nurmagomedov is the undefeated (26-0) defending light heavyweight champion and the favorite (-160) on Saturday night.

Must Watch: Just before his 9th birthday, Nurmagomedov’s father brought him into the woods to wrestle a bear cub that he had chained to a tree. There’s video, you need to see it to believe it.

You’ll notice Proper No. Twelve (an Irish whisky label) prominently displaced inside the Octagon on Saturday night. If you’re wondering how a start-up liquor company could afford to advertise on the canvas, the company’s founder, chairman and majority owner is headlining the card. Sold in Ireland and the United States, McGregor created Proper No. Twelve in partnership with the world’s oldest whisky distillery, Eire Born Spirits.