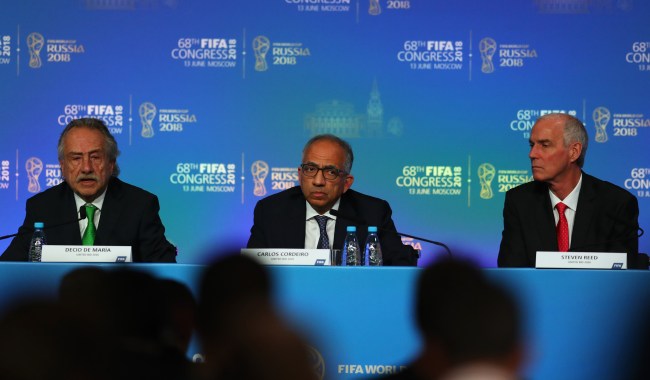 The U.S., Canada and Mexico have won the rights to host the 2026 World Cup, the first with an expanded field of 48 teams, following a vote of more than 200 FIFA member nations; Morocco was the other finalist. Sixty of the 80 games will be played on U.S. soil, including all matches from the quarterfinal round onward; Canada and Mexico will each host 10 matches. The 17 U.S. cities under consideration to host games are: Boston, NY/NJ, Baltimore, Washington D.C., Cincinnati, Nashville, Atlanta, Orlando, Miami, Kansas City, Dallas, Houston, Denver, Los Angeles, SF and Seattle; 10 will be selected. The final is scheduled to be played at MetLife Stadium in East Rutherford, NJ.

Howie Long-Short: The United bid was selected because of the potential revenue (double that of the Morocco bid, $7.2 billion) and the stadium infrastructure that already exists. While all 23 venues submitted for consideration within the United bid already exist or are in the process of being built, Morocco’s bid required 14 venues to be built or renovated at an estimated cost of $15.8 billion. $14.3 billion in revenue would equate to an estimated $11 billion in FIFA profits or a +/- $50 million distribution per member country; 3x the revenue that the international soccer organization generated in Brazil in ’14.

While the tournament is going to be wildly profitable, $14.3 billion in revenue appears to be a pie in the sky figure. The United bid projected it would generate $5.5 billion in revenue from media rights, but FIFA pegs the number closer to $3.6 billion; wisely noting that the time difference prevents matches from being broadcast live (and therefore from maximizing revenue) in parts of Europe and Asia.

Attendance and ticket sale records set in ’94 (last time U.S. hosted) still remain, so perhaps U.S. Soccer Federation President Carlos Cordeiro’s prediction that six games (three opening games, both semi-finals, final) will generate ticket sales and hospitality revenue on par with the Super Bowl is accurate; but the United bid projects $1.5 billion in hospitality revenue, 10x more than FIFA anticipates. For comparison purposes, the last Super Bowl did $150 million in hospitality revenue. The bid also accounts for $1.4 billion in other activities (i.e. not games) that have yet to be announced. Even if the United bid ends up bringing in just $10 billion, it would still represent a 66% increase on the $6 billion FIFA will generate this summer in Russia.

For those wondering, with an unprecedented three host countries, it’s not certain that all three national teams will be guaranteed automatic entry to the tournament; however, it’s likely that COCACAF will amend its rules to ensure all three teams qualify.

Just 24 hours after the announcement that a federal judge had approved AT&T’s $85 billion takeover of Time Warner, it was reported that Comcast (CMCSA) submitted a $65 billion all-cash bid for 21st Century Fox’s (FOXA) film and TV assets (including 22 RSNs); trumping the $52.4 billion all-stock offer that The Walt Disney Company (DIS) had placed in December. Comcast’s interest largely surrounds FOXA’s 30% stake in Hulu, as the acquisition would give CMCSA controlling interest in the OTT service (already own 30%). NBCUniversal CEO Steve Burke stated, “we would be very very interested in growing that business.” In fact, it’s possible that if Comcast’s offer were to be selected, the company wouldn’t even end up controlling the RSNs; language within their bid indicated the company would match any regulatory commitments made by DIS; including to “divest… any of the RSNs.”

Howie Long-Short: FOXA shares rose +7.7% (to $43.66) on Wednesday following report of the Comcast bid. DIS closed up +2% (to $106.30), while CMCSA shares remained flat ($32.32) as investors expressed skepticism about the company increasing their debt level to 4x earnings; necessary to finance both the Fox deal and their purchase of Sky PLC (SKYAY).

It’s certainly worth noting that Comcast’s bid places a +/- $24 billion valuation on the 22 RSNs.

SKYAY is another name to watch. If DIS counters CMCSA’s bid, it’s possible that Fox will up its bid (currently $14.38/share) for the European pay-tv provider. Fox currently owns 39% of the company and was planning to acquire the remaining 61%, with the intention of flipping the asset as part of the proposed $52.4 billion transaction. Should a bidding war arise, John Janedis, an analyst at Jefferies LLC said it wouldn’t be unreasonable for the winning bid to reach $80 billion. For reference purposes, Comcast bid $16.72/share for 61% of Sky. The domestic cable/internet provider wants the asset (and Star – India) to expand its business overseas.