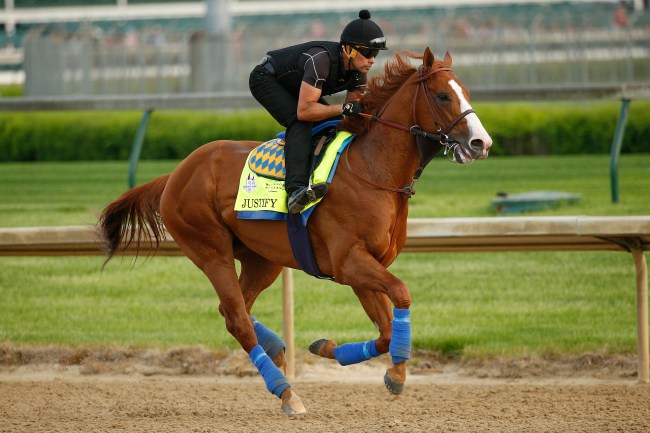 LOUISVILLE, KY - MAY 03: Justify trains on the track during morning workouts in preparation for the Kentucky Derby at Churchill Downs on May 3, 2018 in Louisville, Kentucky. (Photo by Michael Reaves/Getty Images)

Wheels Up will be the sole corporate sponsor with its logo on Justify and jockey Mike Smith, as the undefeated chestnut colt attempts to become the 13th Triple Crown Winner – and just the second the last 40 years – at Belmont Park tomorrow. The member-based private aviation company has agreed to pay “seven-figures” to place its logo on Justify’s blanket and Smith’s pant leg, turtleneck and boots, in the 150thrunning of the Belmont Stakes. It’s the most ever paid for a single race sponsorship in horse racing history. Wheels Up was among the companies that sponsored American Pharoah, when the horse became the first Triple Crown winner in 37 years in 2015. Justify (and Smith) join an impressive “stable” (pun intended) of Wheels Up brand ambassadors, a list that includes Rickie Fowler, Tom Brady, J.J. Watt, Russell Wilson and Serena Williams.

Wheels Up remains privately-held, but there is one way to play the company: T. Rowe Price (TROW). The Maryland-based investment management company led Wheels Up’s $115 million round in September ’16 and co-led (with Fidelity Investments) a $117.5 million private equity round in October 2017. Wheels Up has raised $408.9 million over five funding rounds since December 2013.

As for TROW, the company reported that it brought in $11.3 billion in client cash in Q1 ’18 – the second-biggest quarterly haul in company history – increasing AUM by 2.3%. There’s a reason those that seek active-management want to invest with TROW. According to Bloomberg, the company’s Growth Stock Fund has outperformed 93% of its rivals since 2012. Shares hit an all-time high on Wednesday ($127.43) and closed at $125.22 yesterday.

Fan Marino: Justify has been posted as the 4-5 morning line favorite (from the #1 post), but the undefeated colt won’t be running against a full field. The group that owns Justify (see below), also owns Audible (finished 3rd in Kentucky Derby); and the collective has decided to pull the top contender from the race as it chases horse racing immortality. It’s an easy decision to criticize, but one I’d have likely made myself. Should Justify win, no one will remember who didn’t run; had Audible won, horse racing fans would forever second guess why ownership allowed a stablemate to tarnish a shot at history. It’s worth noting that should Justify win, he would become the first undefeated horse to win the Belmont Stakes since Seattle Slew did it in ’77.

Amazon (AMZN) has acquired the exclusive rights to broadcast 20 English Premier League matches per season in the U.K., becoming the first non-traditional broadcaster to carry league games. The three-year pact, set to begin in 2019-2020, represents the e-commerce giant’s most significant live sports programming acquisition to date. AMZN will live-stream games on its digital Prime video service at no additional charge to Prime members (costs $119/year). Financial terms of the deal were not disclosed but BT Sport is reportedly paying $40 million/year for a comparable package. Late Thursday, with the league’s broadcast rights through the next cycle sold, Executive Chairman Richard Scudamore announced he would be resigning before the end of the calendar year. A successor has yet to be named.

Howie Long-Short: It’s important to simultaneously recognize the significance of this deal (i.e. a FAANG company lands exclusive rights!), while understanding that 90% of the broadcast rights available to media companies within this round were sold to traditional TV providers (i.e. linear television isn’t going anywhere, anytime soon). SKYAY will pay $1.655 billion/season for its four packages (128 games/season), a 14% discount on the expiring deal; while BT got the 5th package (32 games/season) for 8% less ($409.3 million/season) than it’s currently paying for the rights. BT picked up an additional 20 games/season at a discount rate ($40 million/season), earlier this week.

EPL clubs decided to sell the last two rights bundles (Amazon’s and the BT deal signed this week) at a cut-rate price after each failed to meet reserve prices in February’s auction and having concluding that Executive Chairman Richard Scudamore overestimated the interest from non-traditional broadcasters after the first five packages were sold to the old guard.

Fan Marino: The EPL’s 20 clubs currently split international broadcast revenues evenly, but top clubs like Manchester City, Manchester United and Liverpool have been lobbying for a larger percentage; arguing it’s their presence within that attracts the foreign viewer. On Thursday, they got their wish – the league’s clubs decided that any future increases in broadcast revenues would be distributed according to final league position (from ’19-’20 season forward). It should be noted that the new formula ensures the league’s top club receives no more than 1.8x the amount of the lowest-earning club.