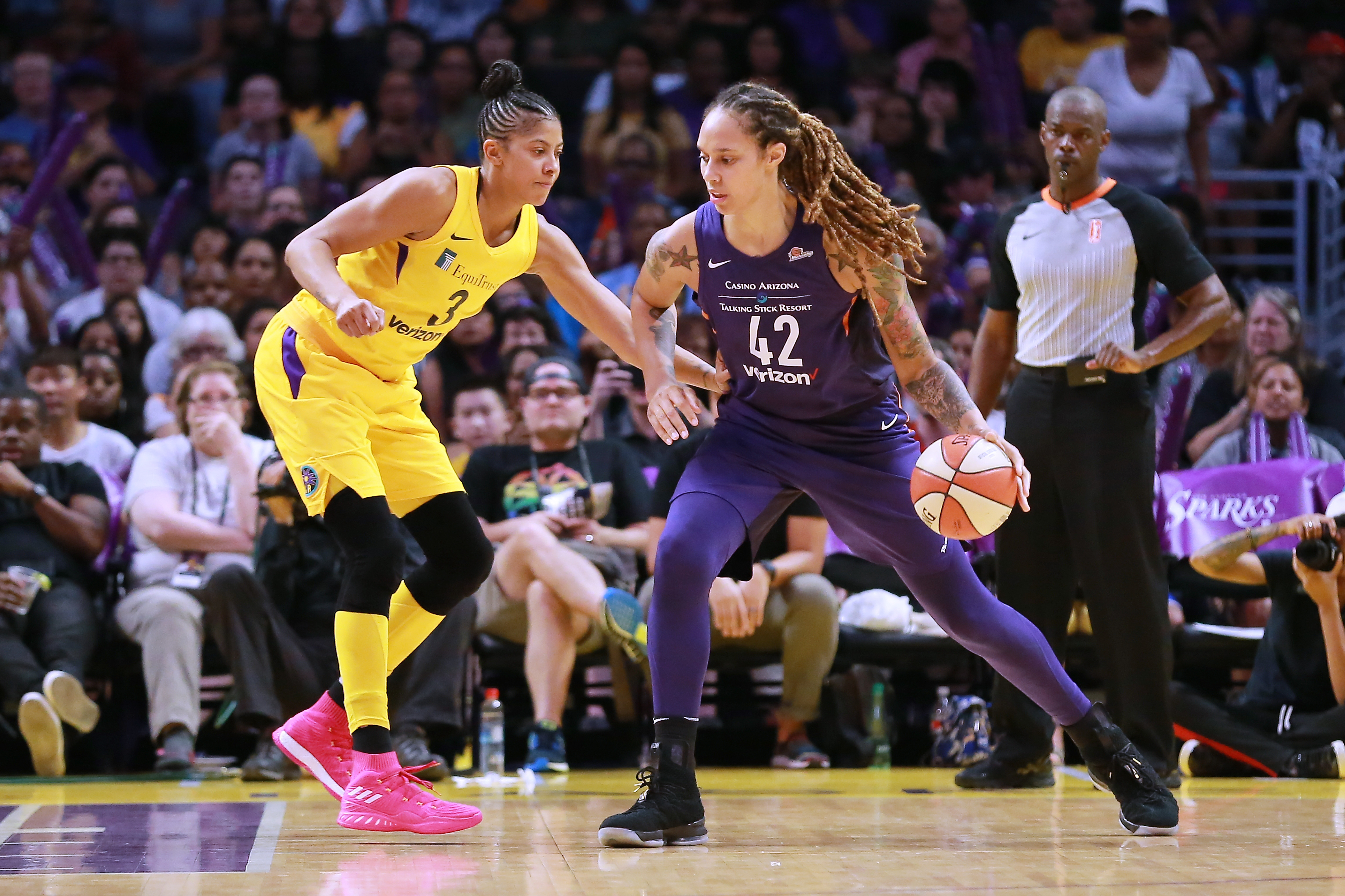 LOS ANGELES, CA – AUGUST 05: Brittney Griner #42 of the Phoenix Mercury handles the ball against Candace Parker #3 of the Los Angeles Sparks during a WNBA basketball game at Staples Center on August 5, 2018 in Los Angeles, California. (Photo by Leon Bennett/Getty Images)

The WNBA held its 15th All-Star Game on Saturday June 28th (in Minnesota) and unlike the 2018 MLB (-6% YoY), NBA (-1% YoY) and NHL (-10% YoY) All-Star Games, viewership increased +17% YoY (to 709,000 viewers); making it the league’s 2nd most watched ASG since ’13. The viewership increase for the midsummer game follows the first half of a season that saw the number of viewers tuning in per game rise +35% YoY across ESPN2 & NBATV and +38% YoY (to 247,000) on ESPN. It’s not just increasing television viewership numbers that indicate the league is on an uptick though, merchandise sales on the league’s website are up 50% YoY and Puma recently announced a league-wide footwear partnership with the WNBA; the company’s first deal with a pro sports league. Atlanta Dream forward Angel McCoughtry took notice of all the progress, calling 2018 “the year of the woman.”

Howie Long-Short: While the partnership deal with Puma is significant and the merchandise sales growth has been impressive, WNBA bulls might want to temper their excitement surrounding the ASG. Even with a +17% YoY increase, the 709,000 viewers that tuned in represented just the 9th largest audience in WNBA ASG history.

As for Puma SE (PMMAF), the company reported a +42% YoY increase in profits (to +/- $36 million) on revenues that rose a currency adjusted +15% YoY (to $1.2 billion) during Q2 ’18, as all regions and product segments reported double digit growth. Quarterly financials would have looked best had the euro been stronger, the national teams they sponsor performed better and if they were seeing returns (not just marketing expenditures) on their basketball business. Shares dropped -5.5% on the news and have continued decline since, closing on Friday at $487.00.

Fan Marino: EA Sports has taken notice of the rising popularity of the WNBA and acted accordingly. The company announced that gamers will have the option to create female players, in career mode, in NBA Live ’19 (launches 9/7) and that female player “abilities and perks” will be modeled after WNBA stars like Candace Parker. The announcement comes just one year after all 12 WNBA teams were included in the game for the first time. This isn’t the first-time EA Sports has included female players in its games, the company’s hockey series first included women in “Be a Pro” mode back in ’11. In that game, females and males competed against each other; all EA Sports UFC and FIFA games since have featured single-sex matches.

Mississippi became the 4th state (NV, NJ, DE) to offer legalized sports betting on Wednesday August 1st, with the opening of sportsbooks at the Beau Rivage Casino in Biloxi and Gold Strike Casino in Tunica; properties owned by MGM Resorts International. The newly passed legislation allows for sports fans in the state to place bets on individual sporting events at land or water-based “legal gambling establishments” (i.e. casinos). MS sports bettors who wish to place in-game bets will be forced to visit their local casino as mobile betting will be restricted to those on the casino’s physical premises.

Howie Long-Short: Mississippi Rep. Richard Bennett believes legalized gambling will be a boon to the state’s tourism business declaring, “Mississippi welcomes you. We hope you’ll come, wager on sports betting and see what we have to offer in the Hospitality State”; and he just might be on to something. No other state in the deep South offers legalized sports betting and neighboring Alabama is responsible for more illegal college football bets per capita than any state. Wondering how long will this advantage last? According to Dustin Gouker of LegalSportsReport.com, Mississippi’s advantage (see: no competition) is likely to last “at least a year and feasibly longer”; with Louisiana, Tennessee and Kentucky the states most likely to join the party first.

Fan Marino: MGM got out of the gate first in MS, but William Hill has made the greatest inroads, announcing partnership agreements with 11 MS casinos (and another West Virginia). WIMHY, which now operates in all 4 states that offer legalized sports betting, has no intentions of slowing down either; in fact, they recently stated their intentions to add gaming partners in 14 more states, Rhode Island being one of them. The company will offer “operational expertise, risk management and trading data” to support IGT, should their bid be selected in the Ocean State; IGT was the only company to submit a bid to provide sports betting within RI.