Picks Against The Spread For Each XFL Week 4 Matchup 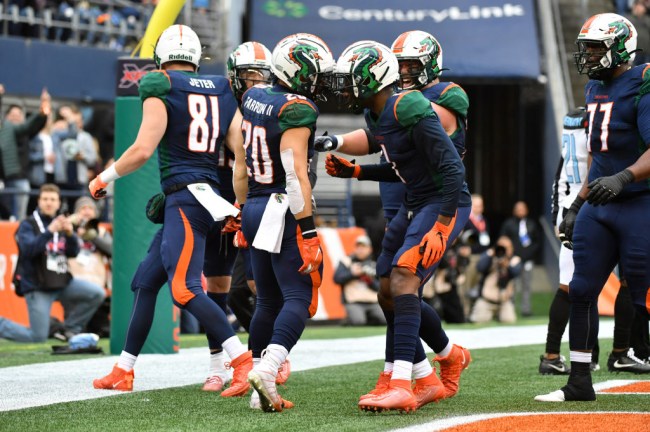 We’re now heading into Week 4 and we saw with last week that unexpected things can happen in this league. We saw the first game we can consider an upset and now the landscape of the contenders and pretenders is not as clear.

This week, we are seeing the first double-digit spread of the season, along with two games that are a one-point toss-up. It’ll be great to see after this week how everything shapes up.

Here are the picks for Week 4 in the XFL.

Despite the fact that both of these teams are 1-2, they couldn’t be heading in more opposite directions.

The Wildcats are coming off their first win of the season against the, at the time, undefeated D.C. Defenders who were looking like a powerhouse. L.A. quarterback Josh Johnson looks healthy and came out strong with 278 passing yards and three touchdowns while the defense held Cardale Jones to just 103 passing yards and picked him off four times.

The Guardians had an impressive start with their debut win against Tampa Bay, but it has been all downhill after that. The defense that was strong in Week 1 has given up 56 points in two games, and the offense has been even worse; they were the first team to be shut out in Week 2 against the Defenders, and we saw the benching of starting quarterback Matt McGloin in the fourth quarter last week.

It seems like the Wildcats are finding their groove after not just beating the Defenders, but smashing them. Despite the fact New York has given up the fewest touchdowns this year, it’s also scored the fewest. Even with McGloin out, who had not been playing well, he’s far better than their other options of Marquise Williams or Luis Perez.

In both of the Dragons’ losses this season, they have held the lead going into halftime. Last week against the Roughnecks, they led 12-6 before being outscored 18-0 in the second half.

The Battlehawks have looked like a championship contender and are currently on top of the XFL East. Their key to victory has been the rushing attack led by Matt Jones, who is currently the XFL’s leading rusher.

Despite the large spread, St. Louis is a far better team. In Seattle’s only win, quarterback Brandon Silver only had 18 passing attempts, he’s averaged 37 in their two losses. They’ve also had trouble stopping the run, which the Battlehawks are best in the league at doing just that.

Not only is this the marquee matchup of Week 4, but the battle for the best professional football team in all of Texas, maybe just in the XFL, but then again, maybe not.

The Dallas Renegades suffered a loss in their first week, but that was without quarterback Landry Jones who has 579 total yards and four total touchdowns in his two starts. They also have a strong runner in Cameron Artis-Payne, who’s 185 rushing yards are second in the league.

There’s a reason why this game is a pick-em’; two teams playing really well and are playing for state pride. I like the way Houston is playing; the Walker and Phillips connection has been incredible to watch, hence why they lead the league in touchdowns scored. This is going to be a high scoring game for sure, well the over the 50 point total, but it’ll be close with the Roughnecks narrowly getting the win.

If this were last week, I would’ve taken the Defenders in a heartbeat, but this week is a little different.

The D.C. Defenders were looking strong going into Week 3 and playing the winless L.A. Wildcats, you would think you can put another check in the win column, but this is why they actually play the games. The Defenders fell to reality really fast as they were destroyed 39-9. Cardale Jones, who looked great in the first two weeks, only threw for 103 yards and had four interceptions.

Tampa Bay heads into Week 3 as the only team still looking for their first win of the season. What’s been their weak point is their inconsistency from the quarterback position; Aaron Murray didn’t play too well in the first week and has been inactive due to injury the last two. Taylor Cornelius has not proved he should have the position, it even got to a point where fans were chanting for Quinton Flowers during their game last week, but Flowers’ lack of playing time seems to have caused internal turmoil.

Trestman tried to be transparent about Flowers’ absence. But skit offer many details other than saying he is currently away from team for personal reasons. Did not say team will prepare for being without him Sunday. He is day to day

This will be an important game for D.C. It needs to go out and prove that last week was just a hiccup and this is a team here to contend for a title. It seems like Tampa Bay cannot get things right at all. With the trouble on the field and now off, it doesn’t look good for the Vipers.