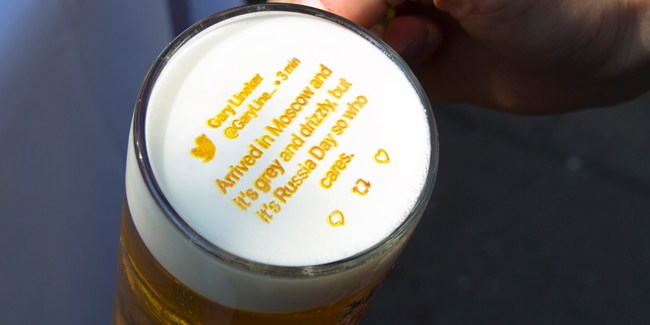 The World Cup is here and you don’t want to miss any breaking news or crazy upsets so you constantly scroll through Twitter. The problem is that you’re not actually watching the live game that’s directly in front of your nose and you miss the action. One brewer has come up with a genius way that you can stay up to date on the latest World Cup news, but are still able to focus on the live action.

Swedish brewer Norrlands Guld partnered with ad agency Åkestam Holst to develop a printer that will write the latest World Cup tweets on the foam of the beer. This allows soccer fans to watch the matches without burying their head in their smartphone screen.

The ink is malt-based so you can drink up the delicious tweets. The refreshing tweets can be printed on a beer “within seconds of being posted.” World Cup news is always breaking so you might want to down the beer fairly quickly, then get another beer with another #WorldCup tweet, you just to stay informed.

Norrlands Guld calls it “The Social Beer” and they debuted the informative suds during Sweden’s recent friendly against Denmark. The tweets on beers will be available at “a few Swedish bars” for the duration of the World Cup.

You know this printing on beers will be used by bars and breweries around the world to promote their business or advertise weekly specials. Soon enough you’ll be drinking advertisements.