Take A Look Inside The $2.4M House Tennis Legends Andre Agassi And Steffi Graf Are Selling In Las Vegas 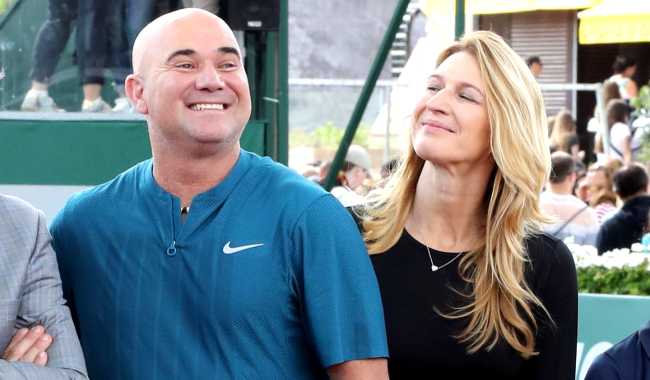 Tennis greats Andre Agassi and Steffi Graf, who have been married since 2001, won a combined 1,770 professional singles tennis matches (900 by Graf) including 30 Grand Slam titles (22 by Graf) during their illustrious careers.

As a result of all of that success, Agassi and Graf earned over $53 million competing in tennis tournaments ($21.8 million of it Graf’s).

They both also raked in some serious endorsement money during their combined 37 years as professional tennis players. So money is not much of a problem for them these days.

According to Realtor.com, the happy couple currently live just down the road from Floyd Mayweather in a 9,000-square-foot mansion in the upscale community of Summerlin, Nevada.

However, that’s just one of the properties they own in and around Las Vegas.

Another one is a 4,573 square-foot abode where Agassi reportedly trained during his tennis career. (Yes, of course, it has a private tennis court.)

The two-story home with an asking price of $2.39 million, is located in the guard-gated Spanish Hills Estates and comes with four bedrooms, four and a half bathrooms, a backyard swimming pool and spa.

Spanish Hills Estates is the same community where Nicolas Cage once owned a massive 14,306-square-foot home that ended up being seized by a bank due to foreclosure.

The house next door is owned by Andre Agassi’s longtime trainer Gil Reyes.

Enter through massive double doors that lead to a spacious interior foyer. Circular stairs lead to a private master retreat on the upper level. It features a pampering bath, a custom-fitted closet/dressing room, and an expansive balcony that overlooks the pool and tennis court, with distant mountain vistas beyond. The kitchen is a picture of efficiency with double wall ovens and a center island with a pro-style gas cooktop.