This California Villa With A Vineyard, 100-Car Garage, And Its Own 1950s Diner Is Freaking Incredible 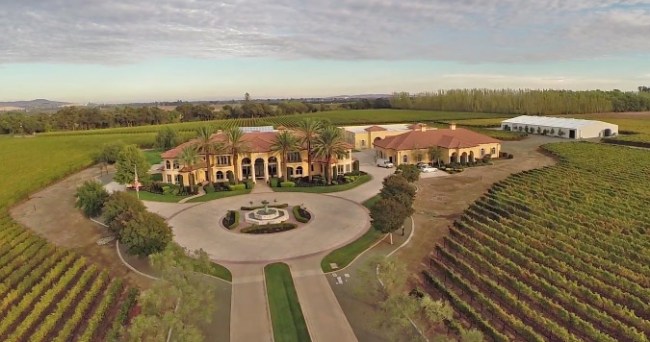 We’ve seen a lot of mansions that one would consider a “dream home,” but this California villa currently up for sale that has a vineyard, a 100-car garage, and its own 1950s diner is literally where I want to go when I die. And the price tag is actually very reasonable.

Located on 80 acres of land in Fairfield, 20 minutes from Napa, Villa De Madre is currently is listed for just $12.9 million. You will understand why I say “just” in a few moments.

The home was built in 2000 by Willis Johnson, owner of the auto auction company Copart, founded in 1982. (Which helps explain the two garages with room for 100 cars.)

The Villa De Madre Estate has 63 acres of cabernet vineyards, while the 22,882-square-foot main home boasts marble fireplaces, hand-painted murals, a living room with a 40-foot-tall ceiling, a double winding staircase, an indoor pool covered by a ceiling of glass, six bedrooms, eight baths, an in-law apartment, a wine cave, and an elevator.

There is also a chef’s kitchen with three ovens, four freezers and built-in step stools. And oh yeah, all of the furnishings come with the home.

The two car barns are a re-creation of a typical 1950s Main Street with storefront facades and a diner with a working soda fountain.

You also get a four-bedroom caretaker’s cottage and a 24,000-square-foot vineyard equipment barn because, as SFGate reports, “the vineyards provide grapes for making up to 150,000 bottles of wine and olive trees provide ample crop for bottling your own olive oil.”