Where Does This $42M Mansion Owned By Chris Bosh Rank Among The Most Baller Homes Of All-Time? 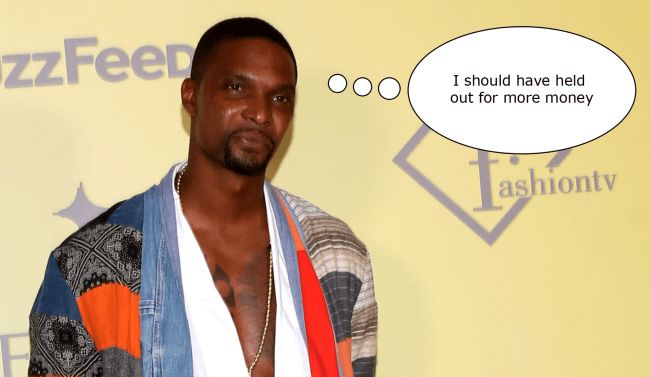 $42 MILLION. Forty. Two. Million… Dollars. That’s what the new owners of the home of former NBA star Chris Bosh are asking for this insanely luxurious 11,709 square foot mansion on the waters of Biscayne Bay in Miami Beach.

How much money did Chris Bosh earn in his NBA career anyway? $239 million?! Dang. For 14 years of playing basketball? Nice work if you can get it. But I digress.

Homebuilding company AquaBlue Group is selling Bosh’s mansion for $42 million after just purchasing it from him for $14.43 million earlier this year.

If they can get that price, Chris Bosh is going to be kicking himself. Then again, Bosh did turn a small $2.1 million profit since he paid $12.33 million for the property in 2010.

Apparently, these developers spent the last several months remodeling the entire place, thus the $27-plus million rise in the home’s price.

Before you decide if you want to buy Chris Bosh’s old palace, check out the tour of the home that was just posted to YouTube last week.

Here’s what it looked like three years ago when Chris Bosh was still trying to sell it for $15.95 million.

Still interested? All it will cost you is about $180,584 a month in mortgage payments, assuming you can make the $8.4 million down payment, of course.

Wanna be a baller? @chrisbosh is selling his palatial Pacific Palisades home for $14.5M http://t.co/KlR2bL0HHX pic.twitter.com/er2WcbNFy2

Should have snagged it when it was just $14.5 mill. Oh well.

See how Chris Bosh’s mansion compares to other celebrity real estate owned by folks like Jessica Biel and Justin Timberlake, Kanye West, Mila Kunis and Ashton Kutcher, Leonardo DiCaprio, The Rock, and others.