Take A Look Inside The 7,500-Square-Foot Mansion Lincoln Riley Left Behind In Oklahoma 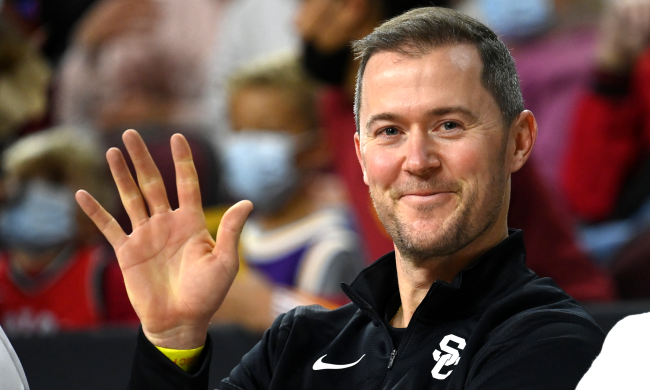 When Lincoln Riley announced he would be leaving the University of Oklahoma and taking over head coaching duties at USC many Oklahomans very very ticked off.

One salty Oklahoma senator even went so far as to suggest the state rename their “most desolate” highway after the former Sooners coach.

Heck, even the Amish were mad.

So, since Lincoln Riley hightailed it out of Norman, Oklahoma as fast as his feet would take him, he is still having to deal with some things he left behind, like his mansion.

Lincoln Riley’s mansion in Norman is certainly unique, if for no other reason than it has a listing price of $2.1 million while the current median list price in the city is $265,000, according to Realtor.com.

According to the home’s listing, the 7,501-square-foot home, built in 2016, has five bedrooms, five full bathrooms, two half bathrooms, and one heck of a very nice pool.

This masterpiece is simply stunning… As you enter the front of the home you’ll notice the back wall in the living room showing off the incredible pool space. As you walk into the kitchen the windows continue on into the breakfast nook, making the main living area and the backyard a wonderfully connected experience.

The upstairs houses a 3rd living room, a playroom, a top of the line theater room, as well as 3 bedrooms and 2 full bathrooms.

Lastly, the recently added cabana with a half bathroom and putting green are true show stoppers. The automatic gate in the front and concrete wall in the back provide a very high level of privacy.

The house is currently pending sale. It was originally reported that USC was buying it as part of his new deal, but that has since been debunked (or was it?).

Not many folks in the Norman area can afford the estimated $10,629 monthly mortgage payment, let alone the $420,000 down payment, but apparently someone down there’s got the cash.

It is a pretty nice place. Take a look…