Take A Look Inside The Humongous $6.9 Million Home Kaley Cuoco Is Selling In California 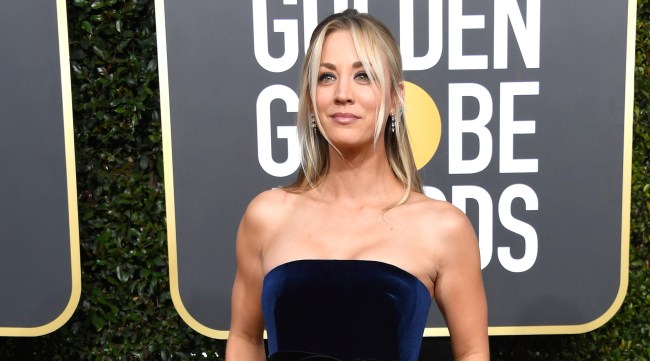 Now that Kaley Cuoco will no longer be torturing the world alongside the rest of the cast of The Big Bang Theory when the show wraps its final season on May 16th, TMZ reports that she is looking to sell her massive Mulholland Park estate in Tarzana, Calif.

The 7 bedroom home is in a super secure gated area. Some of the celebs who have lived there or still call the place home include Kevin Hart, Khloe and Lamar, Kendall Jenner, Bruce Willis, Chris Tucker, Christina Aguilera, Charlie Sheen, Paris Hilton, Slash and Magic Johnson.

As for Kaley’s home, listed by Keller Williams agent Stephanie Vitacco, it’s 8,000 square feet, customized to the 9’s, has a library, an amazing outdoor entertaining area, and a pretty awesome backyard with a pool.

The Los Angeles Times also says about the home…

The Mediterranean-style villa sits on three-quarters of an acre in gated Mulholland Park. Entered through a two-story foyer with a sweeping staircase, the 8,000-square-foot home features custom closets, mosaic tile details, a den, a home theater, seven bedrooms and nine bathrooms.

The resort-like grounds include a swimming pool with waterfalls and a spa, an outdoor kitchen and fire pits.

It even comes with this spiffy Hermès horse-themed wallpaper that cost her almost $5,000.

Even better, Cuoco bought the house from Khloe Kardashian and Lamar Odom so you know the place is just overflowing with good karma.

Khloe Kardashian throws Lamar Odom from her house after crack pipe is found at the home https://t.co/QthXTjRXmW pic.twitter.com/LbjQLqazZw

View even more pics of the massive house over at TMZ.com.