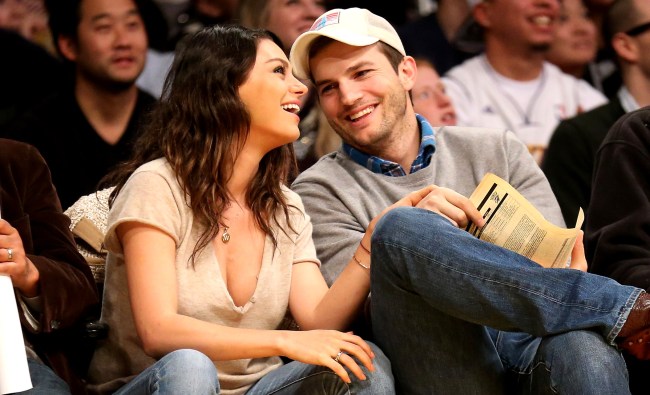 Now probably isn’t the greatest time to be selling a home, but then again, I don’t know much about the market for huge $14 million houses in Beverly Hills. Maybe it’s good?!

It must not be too bad since Mila Kunis and Ashton Kutcher recently put their Hidden Valley home in the Coldwater Canyon section of Beverly Hills up for sale for $13,995,000. (Sneaky how they knocked that extra $5k off the price so it would be less than $14 million, don’t you think?)

According to the home’s listing on Realtor.com, it was built in 1999 and has 7,351-square-feet of living space, five bedrooms, 5.5 bathrooms, “incredible craftsmanship and attention to detail.”

Well, I would hope so.

Beautiful oak flooring flows throughout with hand crafted mouldings and French doors that open to the backyard. The main level has elegant & functional living spaces, including a cook’s kitchen, breakfast nook with built-in banquet, formal dining room, wet bar & a beautiful mahogany paneled office off of the formal living room. Four additional bedrooms reside on the top floor, each with en-suite bathrooms and their own walk-in closets. The master suite features bay windows, dual-walk in closets & a gorgeous bathroom with freestanding tub & picture window that looks out to the backyard. A covered, spacious outdoor area also overlooks the pool & grounds. The lower level includes a temperature controlled wine room, sauna, gym & guest bedroom. This home is located in one of Beverly Hills’ most sought after communities & is a timeless traditional.

It also, apparently, gets you numerous unannounced visits from Jennifer Lawrence. Though I am not sure that would continue once you purchased the house.

According to Dirt.com, Hidden Valley is also the home to Adele, Jennifer Lawrence, Katy Perry, Nicole Kidman and Keith Urban, Cameron Diaz and Benji Madden, Nicole Richie and Joel Madden, Nick and Joanna Swisher, Penelope Cruz, Zoe Saldana and Ziggy Marley. So it’s got that going for it too, which is nice.

What do you get when you buy celebrity couple Ashton Kutcher and Mila Kunis' Beverly Hills home? A sauna, a swimming pool and neighbors like Adele, Penelope Cruz and Nicole Kidman. https://t.co/MRFPZ3AZen

Ashton Kutcher and Mila Kunis have put their Coldwater Canyon home on the market and are hoping for a little less than $14 millionhttps://t.co/g0BXnjZ2VF