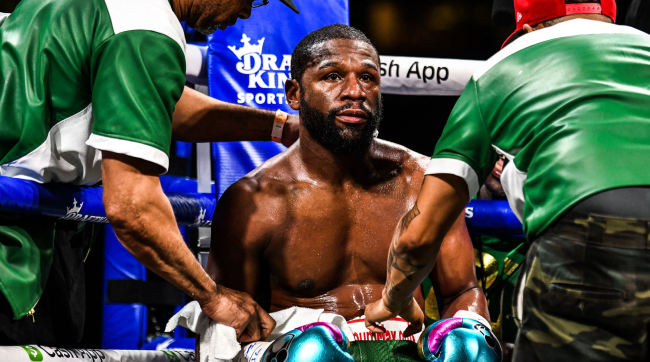 After bragging on social media about his “many homes” this week, it was revealed that Floyd Mayweather, the man who in 2016 ESPN called the greatest boxer of the last 25 years, had purchased another luxe mansion.

Mayweather newest addition to his real estate portfolio is a $18 million waterfront home located in Palm Island, Miami Beach. Records show that the home was purchased by Fojoso LLC, a Nevada corporation owned by Mayweather.

The massive 10,853-square-foot abode boasts nine bedrooms and 10-1/2 bathrooms, an indoor movie theater, a gym, a game room, and a large entertainment area.

It also has a 5,000-square-foot rooftop deck with “unobstructed views of the spectacular city skyline, passing cruise ships, and the coveted city sunset views.” All also available to be seen from the home’s master suite, kitchen, pool deck and several other entertainment areas.

Related: Floyd Mayweather ‘Allowed’ Logan Paul To Go The Distance Because He Didn’t Want Him ‘To Get Hurt’

The three-story home’s listing on Realtor.com also mentions smart house systems, an elevator for easy access to all floors, four garages with space for six more cars in the driveway, a private dock which can accommodate boats up to 100 feet, a center console lift, and a floating dock.

No word on whether Floyd will be moving his gigantic painting of Conor McGregor from his home in Vegas to his new place in Miami.

Take a tour of Mayweather’s new Miami Beach mansion in a couple of recent videos below.