Take A Tour Of The Luxe Home Sylvester Stallone Is Selling In La Quinta For Just $3.35 Million 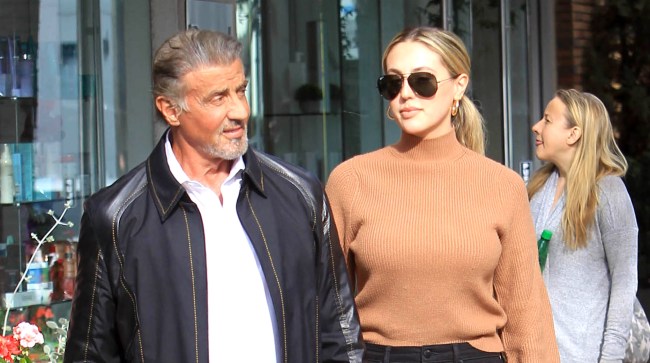 Deal alert! Action movie legend Sylvester Stallone (pictured above with his lovely daughter Sistine) recently marked down the asking price of the incredible home he is selling in La Quinta, Calif. to just $3.35 million.

According to the Los Angeles Times, the house is located in an exclusive golf course community called the Madison Club. Current and former residents of this locale include Kanye West and Kim Kardashian West, Kylie Jenner, Tom Brady, Phil Knight and Jerry West.

But do you get a discount if you run up the steps?! Sylvester Stallone is selling his home: https://t.co/y2NGhFFYaO pic.twitter.com/0uMLrYCYz9

The home’s listing on Realtor.com describes it thusly…

Heavy wood double doors open up to a vaulted ceiling in the entryway, which leads into the double-height living room. A stone fireplace is the focal point on one wall of the living room. The spacious kitchen features a large wood-and-stone island. The upstairs ensuite includes a disappearing flat screen TV at the foot of the bed for entertainment and a fireplace including a private terrace off the bedroom. The serene master bath includes a two-sink vanity and a tub. The dining room opens onto the back terrace. Interior details include arched entryways, beamed ceilings, wine room, walk-in closets, & powder room. The expansive outdoor details includes multiple terraces, a pool and spa shaded by lush palms, and a built-in fire pit. The residence backs up to a burbling creek.

Burbling, people. We’ve got burbling. That alone makes this place worth purchasing.

Sylvester Stallone is selling his home. The pictures are fantastic. pic.twitter.com/klfdx6hNRy

There are no shortage of videos giving us a good inside look at Sly’s place.

So if you’re interested, all it will run you is around $18,234 a month in mortgage payments, with a small $670,000 down payment, of course, and you can move into the same place that once housed Rocky Balboa, John Rambo, and Marion Cobretti. Easy peasy.