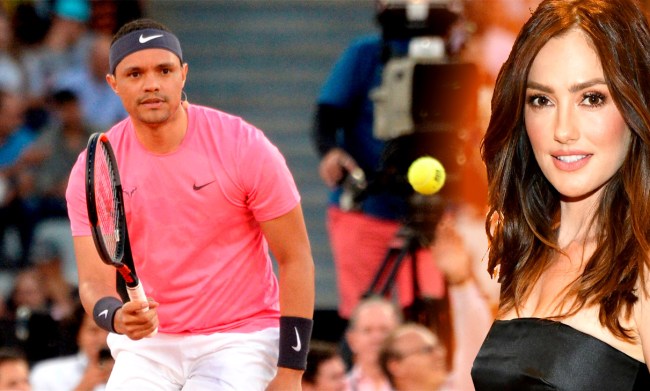 36-year-old Trevor Noah of The Daily Show is doing very well for himself these days. He’s dating actress Minka Kelly, 40, and he just bought a $27.5 million mansion in Bel-Air.

Anyhoo, like I said, Noah is doing very well for himself. In fact, the last time he bought a house it too was in Bel-Air and he ended up selling that one for $21.7 million.

That house was a monster at 10,044 square feet, but apparently, now that he’s no longer living the single life, he needed more room.

His new place is 11,000 square feet with six bedrooms, three powder rooms, and 8.5 bathrooms. You can never have enough bathrooms. Right, Mr. Bezos?

Check out this description from Realtor.com…

There has been no shortage of coverage of this mansion over the years as I found not one, but five videos providing tours of the place. Here’s the most recent…

The home’s previous owner, designer Mark Rios, who was originally asking $36 million for the property, once told Architechural Digest, “So many fashionable houses are filled with beautiful objets d’art that scream, ‘Look at me! I’m wonderful!’ These houses have a lot going on. Our house is the opposite. We’ve kept it simple.”

The 11,000-square-foot sprawling home is surrounded by lush greenery in the swanky Bel-Air neighborhood.

It has a pool on one of the upper decks, a media room, floor-to-ceiling… full story on IG pic.twitter.com/StOmCN9Pyn