How to Stage Your Own Beer Olympics 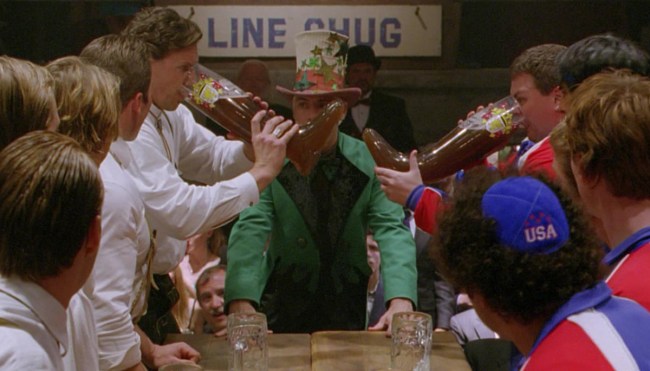 Unless you’ve been training your whole life, given up nights out for early morning workouts, and traded alcohol for flaxseed oil shakes, you’ll probably never get the chance to represent Team USA at the Olympics.

However, there is another kind of Olympics you can compete in; one you’ve likely been training for your entire adult life (and, if we’re being honest, probably since you were in high school): the Beer Olympics.

For the uninitiated, the Beer Olympics combine the competitive nature of intramural sports with enough beer to drown a small village. However, if you’re going to partake in the most sacred of competitions, you have to do it the correct way—and we’re here to make sure you do exactly that.

Teams must be made up of no more than six participants, and no fewer than four. Every team must have an equal number of players, and it’s their job to appoint a captain. You’ll need to have a minimum of four teams, but there’s no cap on the number of squads that can participate.

When it comes to supplies, you’ll ideally want 15-20 cans of beer allocated for each person playing. With that said, it’s always better to err on the side of caution and stock up; if you run out of beer mid-competition, you are automatically disqualified from that event (it’s not like any extra beer is going to go to waste).

While each team will compete in each event, not all of them will require every member to get in on the action. The scoring system is also contingent on the number of squads: the top score is equal to the number of teams—i.e. six teams=six possible points—with the number decreasing by one for each subsequent position (the loser in each event is awarded a single point).

Finally, to avoid unnecessary arguments and geopolitical-related tensions, it’s best to have each team represent a certain color as opposed to a real, actual country.

After each team is introduced to their song of choice, all participants participate in a traditional round of trash-talking. A ceremonial shotgun is optional, but it is highly encouraged.

Prior to the opening ceremony, team captains should have a meeting to determine the order of the five events. However, we advise adhering to the following format.

This is the best event to start off with; not only does every team member get to participate, but it gives everyone the chance to catch a nice buzz right off the bat.

Number of Participants: Two per team

Beer pong is a party staple. However, this isn’t your mother’s 10 Cup.

Number of Participants: One (in addition to one to throw the empty can)

Dizzy Bat requires the use of a wiffle ball bat with the bottom cut off and one team member with really good hand-eye coordination.

Number of Participants: Three per team

IF THE TOP TWO TEAMS ARE TIED AT THE END OF THE FIVE EVENTS, THE WINNER IS DECIDED BY ONE FINAL GAME OF THE VOLUME CHUG.

Once all of the points have been tallied and a winner is declared, the gold medals are distributed and the ceremony ends because first place is the only place that matters in the Beer Olympics; if you’re not first, you’re last.

Additionally, any leftover cans of beer are allocated to the winners so they can enjoy the spoils of their victory.

Now, take this knowledge that I’ve bestowed upon you and make your parents proud as a Beer Olympian.