5-Year-Old Wins A Mercedes After Doing 4,105 Push-Ups Non-Stop, Kindergartner Is Already More Of Man Than You Are 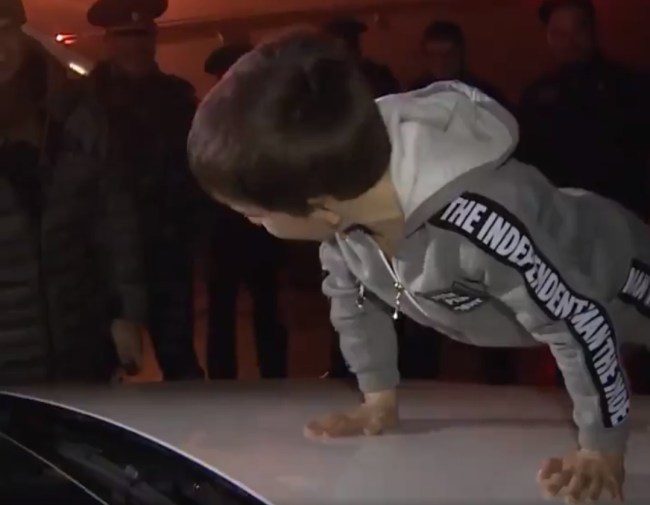 What are you benchin’ these days? Were you excited last week because you started lifting more than 80 lbs? I’ve got some bad news for you, there is a five-year-old who is more ripped than you are. Rakhim Kurayev completed 4,105 push-ups in a non-stop two-hour and 25-minute push-up-apalooza that not only gained worldwide notoriety but also gave him a new car despite just learning how to walk a couple of years ago.

Rakhim, who is still in kindergarten but is already more of a man than you are, attempted to set a world record by doing 4,105 push-ups non-stop in two hours and 25 minutes according to the local sports minister Musa Khanarikov. However, representatives from the Russian Book of Records said they had “minor questions” about his attempt.

That didn’t stop Chechen leader Ramzan Kadyrov from rewarding the youngster. This week, Kadyrov awarded the five-year-old a new white Mercedes-Benz C-Class worth $35,000. After receiving the free car, the 5-year-old started doing push-ups on the hood of the vehicle because why not? This is an amazing, yet shitty gift for a 5-year-old, since that he can’t legally drive in Chechnya until he is 18-years-old. A 13-year-old Mercedes is a pretty sweet ride for your first car, but maybe just give the kid some money for his education and a little spending cash for toys or in Rakhim’s case he probably wants a full home gym.

Rakhim, who has been dubbed the “Chechen Schwarzenegger,” will attempt to break the world record again next week. The young bodybuilder watches cartoons on his phone while he does push-ups because doing push-ups for two-and-a-half hours can get pretty boring. You can’t hold a candle to this 5-year-old when it comes to push-ups. Watch him have no mercy and smoke his own grandpa in a push-up contest.

Going to the gym seems a little disheartening knowing a 5-year-old is more jacked than you.