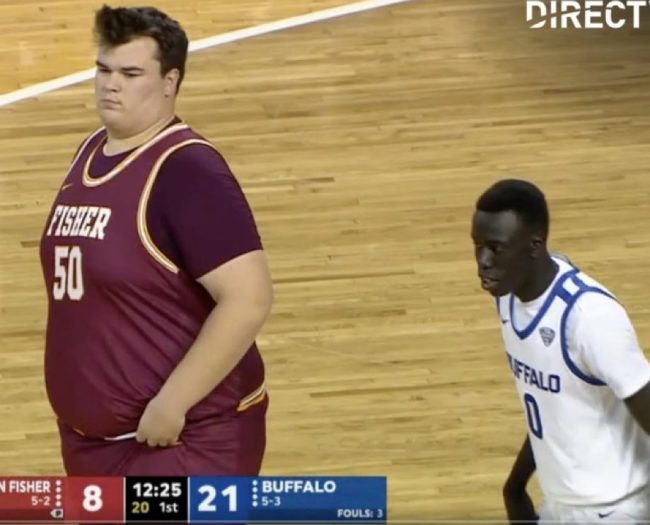 Although St. John Fisher lost by 42 points to Buffalo in an exhibition game on Saturday, the Division-III Cardinals were all anyone could talk about. Specifically, freshman Connor Williams stole the spotlight.

Williams is listed at 7-foot-0, 360 pounds in the forward position, but his size leads him more toward the five-spot. Regardless of where he plays on the court, he provided the greatest sequence in basketball history against the Bulls.

Midway through the second quarter, Williams inbounded the ball from the baseline. He followed his point guard up the court, but as he reached the far end of the logo, he stepped on his opponent’s foot and took a tumble.

Despite rolling his ankle in the process of the fall, Williams got back to his feet like the warrior he is. He made his way to the top of the arch and had the ball passed in his direction.

From there, playing through pain, Williams dropped an absolute dime over top of the defense to his teammate Daniel Cook. Cook caught the ball in stride, took two steps, and jammed it home.

Everything about the fall, recovery, dime and dunk was perfect.

Williams, only in his first year at the small private, Catholic, liberal arts school in Rochester, New York, has not played significant minutes this season. He averages 3.2 points, 1.2 rebounds and 0.4 assists per game, but is 3-for-5 from three on the year.

He is an absolute joy to watch.

On Saturday, he two assists and no turnovers in four minutes played. If he keeps dishing out the rock like he did against Buffalo, it’s going to be difficult to keep him out of the lineup.